Environmental Science and Policy graduate Jacob Woulf shares his photo of Peregrine Falcon Rupert, the nesting male who calls @uwgb home. “It’s now that time of year where we clean out the nest box in preparation for another nesting season. He had to make sure I was doing an adequate job maintaining his nest box,” Woulf said. See Rupert on Instagram.

The UW-Green Bay Peregrine Falcon camera was highlighted as a way for people to still enjoy spring while staying home. “It’s an exciting way to connect with those birds over the internet and virtually,” says Producer Christie Taylor. Listen to the discussion: Enjoying Spring From Quarantine | Science Friday.

Thanks to the work of dedicated students (especially Jacob Woulf, Brandon Byrne, and Noah Nei), faculty mentors (Amy Wolf and Bob Howe), the UW-Green Bay IT staff (especially Ron Kottnitz and Monika Pynaker), Paul Pinkston and staff at Facilities Management, and support from the Cofrin Center for Biodiversity and local bird enthusiasts Paul and Annie Mueller, the nest of UW-Green Bay’s Peregrine Falcons (Mimi and Rupert) is available for online viewing. The nest, located in a converted vent near the top of the Cofrin Library, can be followed at UW-Green Bay Peregrine Falcon Nest Box LiveStream video on YouTube.

Reports Wolf, “The first egg was laid last week, and Mimi and Rupert are now incubating four eggs! We expect the young to hatch around April 24-26. We all hope that these spectacular birds will provide some enjoyment for you and others, especially during these difficult times.”

Find more about the history of this endangered pair, see our 2017 article Campus Cliffhanger: A team of volunteers bands together for successful birth and banding of Peregrine falcons.

Mimi and Rupert, Peregrine Falcon parents, are back at UW-Green Bay after coming here to lay eggs for the last few years. Mimi spent time on Wednesday, Feb. 26, 2020 adjusting the nesting box on the top of the Cofrin Library to her liking. More on the importance and the history of the nesting site, here. The Green Bay Audubon Student Conservation Chapter and Cofrin Center for Biodiversity are hoping for another successful season for Mimi and Rupert. Watch Mimi take a look around her nesting box.

On Thursday, May 30, 2019, Cofrin Library rolled out the green carpet to greet the latest additions to UW-Green Bay’s feathered family. A flock of nearly 100 bird-lovers gathered in the library pavilion for the third annual debut party of Mimi and Rupert’s offspring. This marks the third consecutive year, with successful nests in 2017, 18 and 19.

At a long table, Greg Septon, “founding father” of Wisconsin Peregrine Falcon Recovery Project and UW-Green Bay Prof. Amy Wolf (Biology) co-hosted the ceremony. Septon extracted each chick, or eyass (pronounced ‘eye-yass’), from a single pet carrier, announced the gender and then attached bands to each leg with a pop rivet. Wolf, christened each with a ceremonial name. Once completed, it was back into the container and the next one fetched for the adoring crowd.

Bird one was extracted from the carrier. A big ball of down perched on near fully-grown legs.

“We’re naming the birds after prominent conservation biologists,” Wolf announced, “so this one’s name is Leopold, for Aldo Leopold.”

For those who have made the trek up to UW-Green Bay’s Provost Office or over to Mary Ann Cofrin Hall to view the webcam broadcast of the blue jay-feather-festooned nesting box (Peregrine’s favorite meal), quickly notice these birds appear much larger face- to-face than on the screen.

Wolf has her theories why blue jays are a family favorite… “They’re very conspicuous and larger, so they’re a good meal.” Adding that on observation of all nesting Peregrine falcons in the area, blue jays are a preferred entrée.

“Alright. One down.” Septon tells the crowd. It’s time for the reveal of bird No. 2. Despite their downy appearance, leather gloves protected Septon from the young raptor’s sharp talons and beaks.

The next bird out was bigger, louder and considerably more displeased with the events.

“Anyone want to guess the sex?” Septon offered. The crowd laughs a little. “The females are always louder and a little more difficult to deal with.” The crowd groaned a little. He quickly added “Only Peregrine. It’s always true.”

“OK, one more.” Septon fished out the final falcon, a male, christened Thoreau. Banding completed, it was time for the photo op, but not before a bit of cautionary advice from Septon. “You can get relatively close but every once in a while, a chick decides it’s going to run. If that happens, everyone just freeze,” he advised. None made a break for it while cameras and cellphones record the events.

And as far as getting the birds back to the roof, that task falls to current Biology students Brandon Byrne and Noah Nie. They’ve been in charge of maintaining the nesting box. For them, the process has been both a labor of bird-loving and a serious learning experience.

“They’ve been fun to watch. Going from unhatched eggs to today.” Nie says. “A lot of our research is on nest behavior. How both parents interact with the young.”

Branden also notes that the adult bird interaction has had its dramatic moments. “There was another (banded) female from Milwaukee, named Bratcha, who showed up when Mimi went missing. For a while, we thought, ‘oh no.’ There had been a pretty bad snow storm in January or February. But then Mimi came back and Bratcha left.”

All the televised research and intrigue would have not been possible without the technical expertise of recent graduate Jacob Woulf ’19 (Biology) who devised and installed “Peregrine Cam” with funding assistance from avid community birders Paul and Annie Mueller.

Though the nest will soon be empty, research continues with Byrne, Nie and Woulf assisting Prof. Wolf. “ All three students are continuing to work with me on a research project aimed at describing the behaviors of the Peregrine based on stored video footage. Ultimately, we hope to submit a research paper based on the results.”

It’s obvious these birds did not crave the spotlight. In fact, their celebrity status is fleeting. In a week or two, flight feathers will have completely replaced down and Leopold, Muir, Rachel and Thoreau will have flown their nesting box.

Offspring are not welcomed back home. But one of the benefits of banding is that these birds can be tracked. (One offspring is reported to have a nest in Eau Claire.) Plus the webcam has been a valuable research tool for students studying nesting, incubating and feeding behavior. As for Mimi and Rupert? If recent history is any indication, they won’t stay empty-nesters for long. Stay tuned for next season…

This public event was a quiet kick-off to the Cofrin Center for Biodiversity’s 20th Anniversary year of celebration. Details TBA. 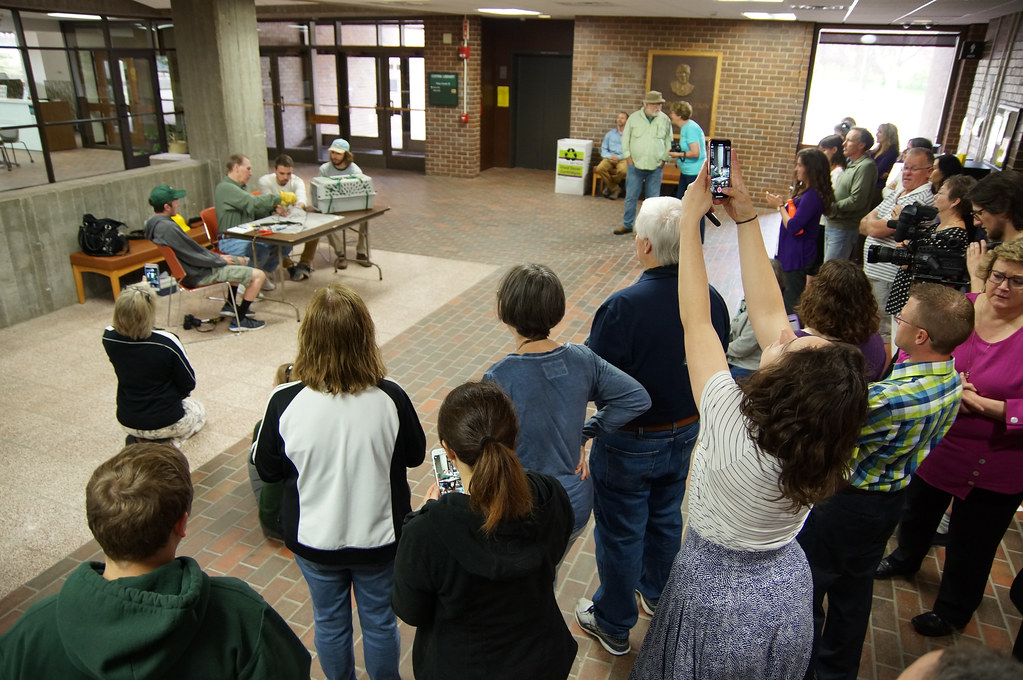 – Story by Michael Shaw; Photos and video by Daniel Moore

Looking for summer reading suggestions? After last week’s popular banding of UW-Green Bay’s nesting Peregines, how about tying a reading list to the conservationists—Thoreau, Carson, Muir, Leopold—for which the falcons were named? See more.

Sounds like the start of a children’s rhyme. Take a walk to the Provost Office for a look at the four baby falcons via the “PhalCON” camera viewing station. Enjoy the view!

Congratulations to Rupert and Mimi, the Peregrine parents of four fuzzy eyasses (baby falcons) hatched recently on the UW-Green Bay campus. The Provost office has a closed-circuit video of the falcon family, and you are welcome to stop by for a viewing. The Green Bay Audubon Student Conservation Chapter has been keeping close tabs. Recently, UW-Green Bay Police officers helped transport the peregrine falcon chicks back from the ground (or other various places they landed) to the roof of the library where their parents could care for them. Between Friday and Monday night (June 15 to June 18, 2018), a total of six transports were needed to keep the eyases safe from predators until they can learn to fly on their own. Falcon caregivers asked that the campus community be on the lookout for any of these little ones in need and call officers at 920-465-2300 ext. 2, if they are seen where they don’t belong. See UW-Green Bay Public Safety’s original facebook album. 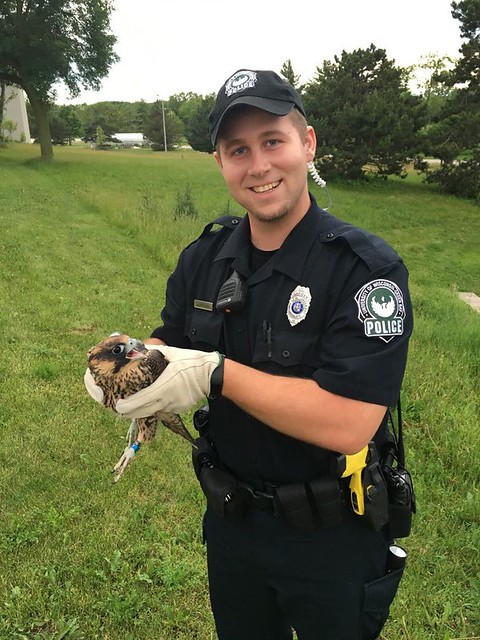