iwanttheNews.com reported of two bird-filled weeks, mentioning UW-Green Bay’s peregrine falcon chick Annie. Annie was banded with her brothers, Tom and Gary, at UW-Green Bay’s Cofrin Library. She was named after the person who helped band her, Annie Mueller.

Faculty and staff are asked to keep an eye out for the young peregrine falcons as they attempt to fly during this time. If found on the ground, Public Safety 465-2300, #2 should be alerted, as they are trained to handle the birds and get them back to their nest. Please stay with the falcon until Public Safety arrives, as the birds will wander off and attempt short flights. Last year five trips were made to get the falcons back to the nest before they were truly ready to fly. Thank you for looking out for our young!

It’s a girl! And a boy! And another boy! Well, one female and two males. Resident Peregrine parents Rupert and Mimi, were once again successful in hatching three fuzzy falcons near the rooftop of UW-Green Bay’s makeshift cliff, the Cofrin Library. They were banded Wednesday, May 30, 2018 in the plaza level of the Cofrin Library. See video and photos. 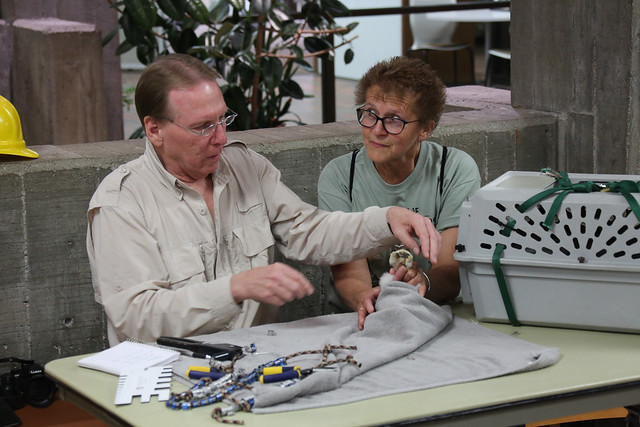 Wisconsin Public Radio is helping tell the success story about UW-Green Bay’s Peregrine falcons. Once thought to be on the brink of extinction, they are now finding success in manmade “cliffs” and urban settings. Reporter Patty Murray takes some time to discuss with curator of UW-Green Bay’s Richter Museum, Tom Erdman. Listen to the interview. 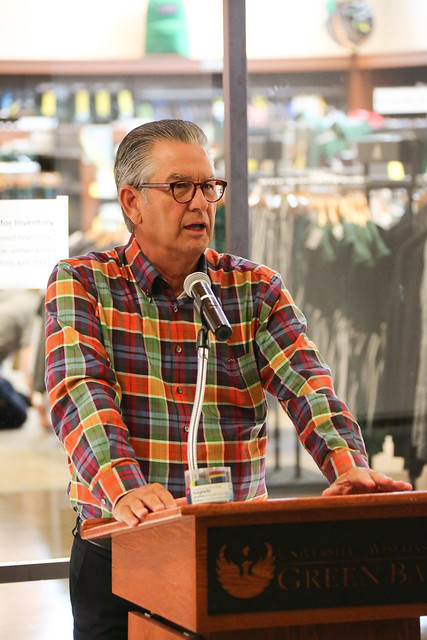 The ballots are in! Gather at noon on Wednesday, June 28, during Get the Scoop on the Student Services Plaza, behind the University Union (2430 Campus Court, Green Bay, Wis.) for a name reveal and celebration of the University’s resident Peregrine falcons. This is the first successful hatch on campus of the Wisconsin endangered species. Enjoy falcon-themed flavored ice cream for purchase, Peregrine falcon trivia for a prize, a short presentation and the reveal of the winning names for the Peregrine youth. The rain location will be in the University Union, in front of The Phoenix Bookstore.

Get the Scoop, sponsored by the University Union, runs from 11 a.m. to 1p.m., offering two scoops for $2. Enjoy these flavors inspired by our feathered friends:

The University of Wisconsin-Green Bay is celebrating its first successful hatching of Peregrine falcons on campus. The four males Peregrines (listed on Wisconsin’s endangered list) hatched in May on the Cofrin Library. Nearly 130 nominations for naming have been entered and narrowed for voting. Voting is open until Noon, Thursday, June 22. A small reveal celebration is being planned for Noon, Wednesday, June 28 on the Student Services Plaza.

The final ballot includes nods to UW System mascots, the Cofrin family (philanthropic supporters), the Green Bay Packers and a few pop culture references. Some of the creative “honorable mentions” not included on the ballot, are:

Online voting for the finalists can be found at bit.ly/UWGBfalcon. Tom Erdman, erdmant@uwgb.edu, director of UW-Green Bay Richter Museum, is overseeing the health and welfare of the birds.

The University of Wisconsin-Green Bay is a comprehensive public institution offering undergraduate and graduate programs to about 7,300 students. The University transforms lives and communities through exceptional and award-winning teaching and research, innovative learning opportunities and a problem-solving approach to education. For more information, visit www.uwgb.edu.

It’s time to name those falcons! The University community and members of the public are invited to take part in naming the historical, first successful Peregrine falcon hatch on the UW-Green Bay campus.

Thank you to everyone who provided potential names for campus’s fierce falcon foursome. More than 120 groups of names were submitted by students, staff, faculty, alumni and community members! The small working group responsible for review of the nominations found the suggestions amusing and creative and had difficulty paring down options for the official ballot. Some of the creative “honorable mentions” not included on the ballot:

Guardians of the Galaxy characters

Lord of the Rings characters

You, Double You, Gee and Bee

What made it on the ballot? You will have to vote to find out! Voting is open through Thursday, June 22 at noon. A celebration and name reveal will occur Wednesday, June 28 at noon in conjunction with Get the Scoop on the Student Services Plaza.

The UW-Green Bay Peregrine falcons are doing well after a feather-ruffling week. The foursome and their parents have been seen (and heard) perching on the Cofrin Library and elsewhere on campus as they learn to hunt and take flight. Last week Tuesday (June 13), one young falcon faltered during flight lessons, and was trapped on the third floor entrance overhang of Cofrin Library (or maybe he was attempting to check out a book on learning to fly?). He was quickly rescued thanks to Tom Erdman (Richter Museum of Natural History) and Officer Jones (Public Safety).

All four young peregrines (endangered in Wisconsin) weathered the severe storms last week, including strong winds and heavy rain. After the Wednesday, storm and tornado warnings, “all were perched on the roof (north side) at sunset drying themselves,” Erdman shared. “This has been a steep learning curve for them and us!  Only with the help from members of facilities and security was this nesting attempt a success. Their help is greatly appreciated.” UW-Green Bay is proud to announce that after seven long years of trying, the University is now home to its first successful nesting of Peregrine falcons…and we need your help in naming our new feathered friends!

The four male eyasses (baby falcons) pictured above hatched in May on top of the University’s eight-story Cofrin Library. We’re so excited about our firstborn (err…first-hatched!) that we are inviting campus and community to take part in the naming process! Have an idea? Submit it using this form. Selected names will be part of the official ballot hitting social media next week. Names must be submitted in groups of four (example: Paul, John, George, and Ringo). Nominations must be received by midnight, Monday, June 19 to be considered for voting.

Congratulations go out to proud parents Mimi and Rupert and the University’s Tom Erdman. Once on the endangered species list, Peregrines are now being successfully reintroduced into Wisconsin through efforts like those of Erdman, resident bird expert and curator of UW-Green Bay’s Richter Museum of Natural History.