UW-Green Bay’s northern pike research is led by a team of undergraduate students who are enrolled in Fish and Wildlife Population Dynamics class taught by Associate Prof. Patrick Forsythe (NAS). This is the sixth consecutive year that UW-Green Bay students are researching the northern pike spawning populations at the Suamico, Wis. site.

The nets are checked once daily until the pike migration is over, which will be towards the end of April or early May. Once the fish are taken out of the nets, biological data is collected from each fish. The length, sex, and ripeness is recorded on data sheets, along with any notes of damage to the fish. Each northern pike is then tagged with either a pink Floy tag, if it is a female, or a green Floy tag, if it is a male. Lastly, 2 to 3 rays are taken off of the anterior (front) side of the pelvic fin. These rays are then dried out and are used to estimate the age of the fish.  Towards the end of the northern pike migration, there is a smaller migration of bowfin to the wetland. The team is also interested in taking measurements and tagging these fish.

“The students have worked as technicians for me and are part of the American Fisheries Society where they have received additional training,” said Forsythe. “Our research is jointly conducted with the Department of Natural Resources, Fish and Wildlife Service, The Nature Conservancy and Brown County. Long-term research is important for detecting trends in population dynamics (number of spawning fish) that are nearly impossible to glean from a single year of sampling.”

This project allows researchers a good idea of the timing of the northern pike migration each year and how water levels and water temperature influences this migration. It also allows them to determine the sex ratios of the fish using this particular wetland for spawning. This is the first year collecting the pelvic rays for aging, but this will help determine what the range of ages and average ages are for the spawning population of northern pike.

“Long-term research is important for detecting trends in population dynamics (number of spawning fish) that are nearly impossible to glean from a single year of sampling,” Forsythe said. 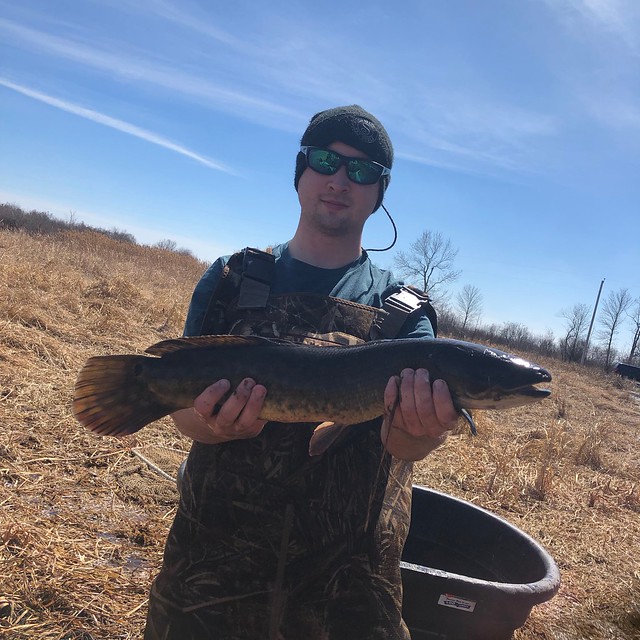