Studying with a spider, a gecko, and lots of other insects, arachnids and reptiles…

Scorpion at Study with a Spider event in Environmental Sciences building.

UW-Green Bay graduate student Jillian Kurovski (Environmental Science and Policy) hosted “Study with a Spider,” in UW-Green Bay’s new Science Study Lounge, Oct. 28, 2021 on the second (plaza level) of the Environmental Sciences building. Students who stopped by to study with the insects, arachnids and reptiles from all over the world, learned why they’re not so spooky, after all. Kurovksi brought in a leopard gecko and eight different species of insects and arachnids for UW-Green Bay students to learn about.

She came up with the idea having worked previously at Iowa State University Insect Zoo as an undergraduate.

“Part of my job at the zoo was to travel across the state of Iowa giving presentations and displays of all our animals. It was the best job I ever had, and I eventually became ‘rearing room specialist.’ It was essentially a managerial role, but most importantly, I was tasked with developing the best care and breeding protocols for our animals. After leaving the job to do research, I started my own mini-zoo at home. I have my own menagerie of spiders, scorpions, reptiles, and insects. Since quitting the zoo, I have done a lot of my own freelance displays and programs locally in Iowa as well as virtually across the country.”

“Study with a Spider” came out of her memories of working at the zoo.

“Not only giving displays and programs, but I would often go into work and sit with the animals while I did homework. I’d let giant mantises run around while I did calculus, or I’d let the hermit crabs explore while writing essays. I know a lot of people are uncomfortable or fearful around such animals but working at the insect zoo really taught me that they’re some of the most underappreciated and misunderstood animals. It’s been part of my mission as a science communicator and someone passionate about arthropods to teach people how incredible and important these animals really are. As I always tell people, they don’t have to love them like I do, but it’s important to recognize the role they play in the world.”

Kurovski said she had about 30 students stop by the Science Study Lounge. She thought it would be a great way to not only introduce people to the animals, but the SSL—created to help form an inclusive academic community since its opening on Oct. 4, 2021.

“The SSL team wants people to know the SSL is a resource to them not only as a study space, but as a community space,” she said. 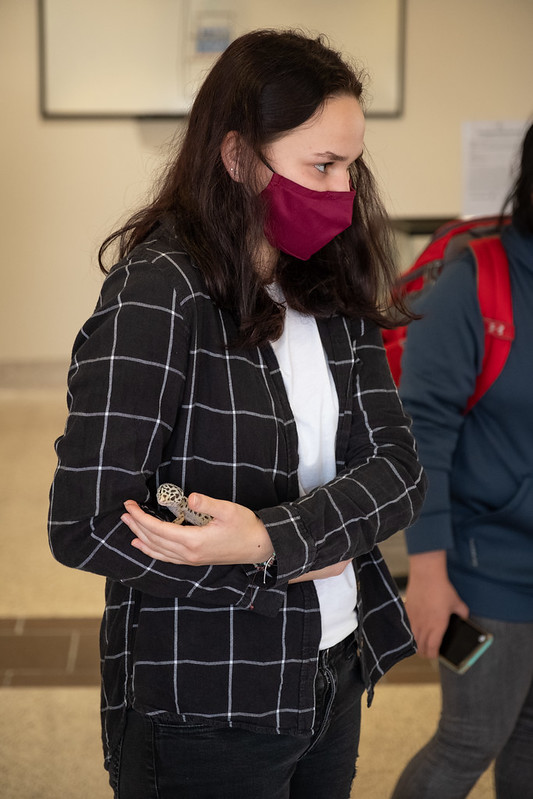