Though you might not have noticed, more than 100,000 visitors dropped into Green Bay over the May 11th weekend, just for a quick bite and a rest on their way north. Not snow birds, but real birds. Hundreds of thousands of songbirds “overwinter” in Florida and Georgia (and Central and South America) then fly north to breed in one of the  greatest mass migrations on the planet. The event celebrated as International Migratory Bird Day is every second Saturday in May.

Joining in this year’s celebration on May 11 events at the Bay Beach Wildlife Sanctuary included guided bird hikes, family activities to make a bird house or feeder and demonstrations on bird banding by a coalition of UW-Green Bay faculty, staff, alumni and students, with the help of the Northeastern Wisconsin Audubon Society, UW-Green Bay Audubon student chapter (Green Bay Audubon), U.S. Forest Service and Marinette County.

“This is our fifth year,” said Erin Giese, senior research specialist at the Cofrin Center for Biodiversity. “It’s a great way to interact with the public and the birds at the same time.”

Turns out there are good reasons to band a bird—estimating bird populations, tracking migration routes, determining how long birds live, gathering more precise information about individual birds (age and sex) and resighting purposes. Banding is also a very serious and carefully choreographed process. The permits and data base for all things banding originates at the U.S. Geological Survey. “We’re only permitted to band song birds and small landbirds, but you can band almost any kind of bird” Giese explains. (If a hummingbird or goose wanders into the net, they get a free pass.)

But you can’t even net a gnat without having a certified “master bander” on hand, who in this case is Bob Howe, the founding director of UW-Green Bay’s Cofrin Center for Biodiversity. It’s under his office and the collective expertise of this band of bird-lovers that others can learn the skills needed and earn sub-permits to also engage in the handling and banding of birds.

Though this particular May Saturday is cloudy, the winds are calm and Howe is expecting they will stay busy. “It’s highly variable, this is shaping up to be a good day. We’ve had as many as 52 birds in one day.”

The net set-up resembles a volleyball game set up in a shrubby march and nearby forest. The birds fly into, and get captured in fine, black “mist nets.” Then the birds unharmed birds are safely and carefully extricated from the net, placed in an individual bag, taken to the banding table, processed and then released.

Busy at the net is UW-Green Bay Biology Professor Amy Wolf and alumnus Greg Cleereman. Extracting annoyed songbirds, especially chickadees, can be an exacting and arduous process. “They make a tight fist and they have very long toes.” Wolf explains while untangling the annoyed ball of feathers. “But better than robins,” Cleereman adds. “They poop on you.” The birds are then carefully (and individually) bagged and taken to the banding station.

From there a steady flow of parents, kids and dedicated birders watch the assembly line as birds move from out of the bag, to banding, to measurements, and eventually to freedom. Among those at the table, Tara Hohman (finishing up her graduate degree in Environmental Science and Policy) is being assisted by underclassman Jacob Shariff (limited on this, his first banding experience, to recording data only, but given an opportunity to hold and release a bird.) “We take a suite of measurements on these birds including height, weight wing length and tail length, bill width and tarsus (imagine part of a bird’s foot),” Hohman explains.

The big send-off happens when the bird is released by an onlooker, which consists of the bird being placed into an open hand to instantly fly away. Occasionally, a bird will sit for a second or two, to the amazement of the crowd.

Kids run through a badminton net and get “caught” but it’s not quite the same struggle to extricate them that real birds can be. Once released, their arm length and weight are recorded and they also receive a rubber “band” bracelet. “We’re just demonstrating the same process as the bird-banding booth. To show how and why we band birds.” She explains. And who knows? Maybe a future bird-bander or two was also captured. 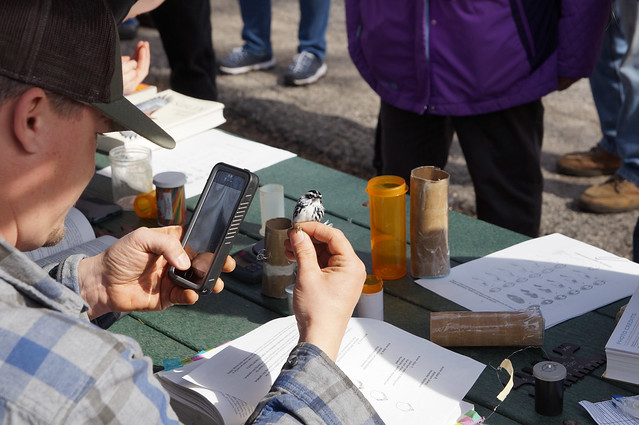