Learning in Retirement is throwing open the doors to one of its classes that will feature a presentation by Chancellor Gary L. Miller and discussion of the institution’s 50th Anniversary. Faculty, staff and friends are invited to this Wednesday’s installment of the LIR course “Celebrating 50 Years and the Power of the Phoenix.” The session runs from 10 a.m. to noon Oct. 21 in the 1965 Room. Moderator Mike Troyer and a panel of retirees and campus historians will share stories from UW-Green Bay’s development over five decades; it is expected that Chancellor Miller will open the program by discussing how a history of innovation positions UWGB for leadership over the next half century. The first of two Phuture Phoenix Days this fall brought 950 fifth-graders from across Northeastern Wisconsin to the UW-Green Bay campus on Oct. 13 for a full day of tours, activities and fun. The program builds connections with young students to promote educational attainment and get them thinking about secondary education at a younger age. Student photography interns captured the day in photos. 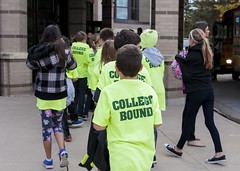 Biologist Bob Howe, professor of Natural and Applied Sciences and director of the Cofrin Center for Biodiversity, and Erin Giese, the Center’s data manager, are UW-Green Bay’s participants in a newly announced, multi-state, multi-university grant of $10 million to monitor coastal wetlands around the Great Lakes Basin over the next five years. This project expands an existing grant that has involved Howe, Giese and more than 20 UW-Green Bay undergraduate and graduate students since 2010. Coordinated by researchers at Central Michigan University, the project allocates $222,000 to support field activities and data analysis by UW-Green Bay staff and students. The basin-wide coastal wetland monitoring program evaluates ongoing and future wetland restoration efforts, as well as fish, invertebrates, birds, amphibians, plant communities, and chemical and physical variables at the majority of coastal wetland areas throughout the Great Lakes basin. Results will be used to prevent further wetland degradation and to set priorities for future wetland protection. Along with Central Michigan and UW-Green Bay, the initiative includes collaborators from the University of Minnesota-Duluth, UW-River Falls, Lake Superior State University, University of Notre Dame, Grand Valley State University, University of Windsor, State University of New York at Brockport, Michigan Department of Environmental Quality, U.S. Geological Survey, Environment Canada, and Bird Studies Canada.

The University of Wisconsin-Green Bay continues its “music from every angle” 6:30 Thursdays experience with a two-piano duo/ husband and wife team, Sylvia Hong and Michael Rector. They will be presenting “The Music Trance” at 6:30 p.m. Thursday, October 15 in Fort Howard Hall of the Weidner Center for the Performing Arts at UW-Green Bay.

Hong and Rector are prize winners of the Ellis Duo Piano Competition and have concertized extensively in both the U.S. and abroad. Hong is Artist-in-Residence at Belhaven University; Rector is an assistant professor of music at the University of Wisconsin-Green Bay.

In a program that illuminates the power of harmony and repetition to create intense musical effects, Hong and Rector will perform pieces by a stylistically diverse group of composers. Expression ranges from romantic yearning in Schubert’s Fantasy, to the architectonic force of Rachmaninoff’s Symphonic Dances, and the developing ecstasy of John Adams’s Hallelujah Junction. The couple is committed to making the language of classical music vivid for people of all ages and backgrounds.

The “6:30 Thursdays” concert series is designed to connect campus and community to music in meaningful ways. Composers, performers and arrangers perform their work, offer commentary and lead discussion about diverse musical styles and the fact there are often multiple, varied ways to approach any given piece of music.

The 2015-16 “6:30 Thursdays” series features a wide array of musical styles and guest artists, including jazz, classical, contemporary, and “third-stream” music blending jazz and classical. All 6:30 Thursday events in Fort Howard Hall are free and open to the public. Donations are welcome. Remaining 2015 concerts are: The University of Wisconsin-Green Bay is celebrating World Food Day by hosting an event on October 22 that highlights whole food choices and local farmers in the Green Bay area. All events scheduled throughout the day will take place in the Phoenix Rooms in the University Union on campus, 2420 Nicolet Drive.

The keynote speaker for the event is Mark Schatzker who is nationally known for his book, The Dorito Effect. He will discuss the importance of moving from high-processed, chemically-enhanced, and mass-produced foods to consuming foods the way nature intended. His speech will be from 6 to 7 p.m. followed by locally-sourced desserts and refreshments. His talk concludes a full day of activities including:

• Panel discussion — Beginning at 1 p.m., a panel of local farmers and restaurant owners will present their stories to UWGB students and faculty and community audience members
• Food, Health, and Sustainability Expo — from 3 to 6 p.m.
• Farm to table dinner — Beginning at 5 p.m., a free and healthy farm-to-table dinner will be prepared and served by the Dietetics Health and Fitness Club

Many UWGB student organizations are involved in planning, promoting, and creating this event including the Dietetics Health and Fitness Club, Sustainable Local Organic Food Alliance (SLO), the Public and Environmental Affairs Council (PEAC), Campus Kitchens, Healthy Fork, SGA Environmental Affairs, and Student Life. The event is one of many being held throughout the year celebrating UWGB’s 50th Anniversary.

All events are free to campus and community members. For more information about this event, visit the UWGB Food Day Celebration 2015 website or email Caela Stenski, President of the Dietetics Health and Fitness.

It started with a small group of high school psychology and college teachers getting together to discuss professional development opportunities. It has turned into something “EPIC.”

On Saturday, October 10, the University of Wisconsin-Green Bay Psychology faculty will host more than 40 educators from the Midwest, for the 2015 Excellence in Psychology Instruction Conference (EPIC).

Topics and breakout sessions include Understanding the Brain, Innovative Uses of Teaching Technology, Integrating Research into Your Classroom, and more. A full agenda can be found here.

UW-Green Bay Psychology Prof. Regan A. R. Gurung, past recipient of the Wisconsin Professor of the Year Award from the Carnegie Foundation for the Advancement of Teaching, will present the keynote, “Cultivating Learning: Capitalizing on the Science of Learning.”

The fee is only $20 and includes lunch. For more information or to register.

In an email communication Monday to UW-Green Bay faculty and staff, Chancellor Gary L. Miller shared an overview of a plan to reorganize the University’s operational and organizational structure. The new model, with four academic deans reporting to the provost and vice chancellor, will replace a two-dean structure largely unchanged since 1996. (Current titles are dean of the College of Professional Studies and dean of the College of Liberal Arts and Sciences.) The four colleges and schools under the new structure will be:
• Cofrin School of Business
• College of Health and Education
• College of Science
• College of Liberal Arts

The faculty University Committee and the chairs of the Academic Staff and University Staff committees have endorsed the concept. Miller says he will seek UW System approval at the December meeting of the Board of Regents, with implementation by July 2016. With an accompanying reshaping of the Division of Outreach and Adult Access, reallocation of vacant positions and integration of some services into other budgetary units, the changes project as cost neutral or a net savings. The Chancellor says the need for reorganization was illuminated over the past year through the efforts of the Invent the Future work groups, the new University Planning and Innovation Council, and individuals across campus charged with managing unprecedented state budget cuts. UW-Green Bay’s new administrative structure will better position deans to support faculty, pursue fundraising opportunities, foster innovation and community engagement, and grow their respective programs, Miller says. To see his message to faculty and staff, which includes budget projections, a pledge of continuing governance involvement and a draft plan for how academic programs will be grouped, visit the Chancellor’s website.

Knowing that not everyone can make it back to UW-Green Bay for an evening, mid-week presentation, 50th Anniversary staff asked that presentations from the Last Lecture Series be videotaped. Humanistic Studies Prof. Derek Jeffreys was the first to present a lecture on a topic he would choose, if it was to be his very last.

The Steamroller Print event on September 5-6 was part of a multifaceted “Exquisite Corpse” project organized by Hardy Gallery in Ephraim, Wis. with Style’s guidance.

The Village of Ephraim steamroller was used as a giant printing press, rolling over the inked boards to transfer an image onto paper to create six-foot high printed figures. Twenty artists carved woodblocks for the steamroller print event included eight UWGB students and alumni along with other Door County artists.

In addition to guiding the steamroller prints, Style was the project organizer for a the Exquisite Corpse Print Exchange. Style solicited and recruited 28 Wisconsin artists from throughout the state to design and produce an original print edition of either the head, torso, waist or legs section — later to be randomly combined to complete seven 44-inch high full figures that are on display in The Hardy Gallery.

Digital images of the exchange prints were then used by Prof. Style to design and produce interactive flipbooks that are for sale at The Hardy Gallery. “The Exquisite Corpse Head-to-Toe and End-to-End” exhibit continues through October 13 at The Hardy Gallery on the Anderson Dock. One full set of 28 11″ x 15″ original prints are now part of the UWGB Printmaking Collection.

“Exquisite corpse” is an early 20th century parlor game by which images are collectively created with each artist knowing only his or her part and where to meet up with the other parts. 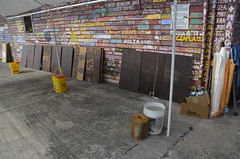 As UW-Green Bay celebrates its 50th Anniversary another UWGB entity is also celebrating a milestone — The UWGB Collegiate Chapter of Habitat for Humanity is in its 20th year, and with it, a special Anniversary Celebration Alumni Build is in the works.

Twenty-four volunteers are sought for four-hour shifts in the morning or afternoon (8 a.m. to noon and 11:30 a.m. to 3:30 p.m.) with lunch midday provided by current members of the campus chapter.

The event provides an opportunity to reunite and reminisce, while helping the campus archivist fill in gaps on the history of the organization, and at the same time provide homes for two deserving families in Green Bay. Looking back… on May 25, 1995, UW-Green Bay was granted campus chapter status by Habitat for Humanity International. In the two decades since, literally hundreds of UW-Green Bay students have contributed to the cause of eliminating homelessness and providing safe, decent affordable housing to deserving families — in Green Bay, throughout the United States, and around the world. For many of those students, their participation in Collegiate Challenge trips was among the most significant and memorable experiences of their college careers.

Over the course of 20 years, UWGB students participated in at least 24 winter, spring or summer break trips throughout the United States and to two foreign countries to build homes for families in need. Habitat builds are far from vacations. Prior to a build, students must first spend a semester conducting fundraisers to raise money to cover trip costs. Then, over winter or spring break, they travel hundreds of miles by bus or van, stay for a week in very modest housing (typically a church basement or volunteer center), share just a couple of showers/bathrooms, and spend the bulk of their “break” time laboring — framing, roofing, putting up siding, insulating, hanging drywall or painting. They return from their college break more exhausted than when they left. But almost to the last one, they say the experience was incomparable, and the satisfaction of working together to provide a deserving family a home is its own reward. So gratifying was the experience that many students participated in three or four Collegiate Challenge trips during their college years.

Many trips through the years have been documented on the UWGB Habitat for Humanity Facebook page.