UW-Green Bay alumna, Gina Vlach (’16, Environmental Policy and Planning) recently authored a report for the city of Milwaukee entitled, “On the Right Track? The Use of TIF for Milwaukee’s Streetcar”. Last year, this space shared a feature on student Libby Schmit, interning with the campus garden and hoop house.

To receive updates about the gardens and opportunities to order produce, email ibuakaa@uwgb.edu and you will be added to the weekly veggie sale list. All are welcome, not just the campus community!

UW-Green Bay alumnus Joe Smith (Public Administration, Environmental Policy & Planning) is on the ballot for the Egg Harbor Village Board. He served on the Village Board from 2012 to 2017. Read more.

Katie Werner ’13 (Public Administration and Environmental Planning and Policy), is not your stereotypical nutrient management planner. She has no farm background, and she is in a field typically dominated by males. However, that hasn’t stopped her in her role with the Country Visions Cooperative, a company in Reedsville that provides services to 14 counties in eastern Wisconsin. Read the full story in The Country Today.

The Ethics in Business Awards were held Nov. 9 at the KI Convention Center, downtown Green Bay. With about 700 people in attendance, UW-Green Bay and specifically Public and Environmental Affairs (PEA, Economics) faculty and students were recognized for their work as part of the “research team,” of which Prof. John Stoll (PEA) coordinates. The research team devotes countless hours in reviewing nomination forms of about 100 nominees. The students prepared a report to the award selection committee, an independent group of community members that chooses the recipients. Alumnus Kaitlyn (Gilles) Lindner ’11 (Environmental Policy and Planning and Public Administration) headed the selection committee, and Green Bay Women’s Basketball Head Coach Kevin Borseth, was the featured speaker. Alumnus Tom Hinz ’03 (Interdisciplinary Studies) served as the Ethics in Business Selection Committee Chair. The annual luncheon honors ethical business practices in Northeast Wisconsin.

The Environmental Management and Business Institute (EMBI) collaborated with the Alliance for the Great Lakes on two newly funded projects; Agricultural Outreach in the Lower Fox Basin and the Lower Fox Perennial Forage Project. To oversee the projects, a joint position was created in partnership with the Alliance for the Great Lakes and will be filled by newly hired alumna, Molly Meyers (Business Administration ’07 and Environmental Science & Policy ’14). The Agricultural Outreach project brings together groups of farmers, crop consultants and conservation professionals to build relationships and learn from each other about agricultural practices that improve soil health, water quality and farm profitability. The Perennial Forage project will highlight how perennial forages (alfalfa-grass mix plantings) are a win-win for agriculture and water quality. This Perennial Forage project provides technical assistance, cost sharing and outreach to increase the number of regional acres in perennial forage. In addition to the coordination of these projects in cooperation with grant principal investigators and collaborators, Meyers will develop and implement strategic outreach and demonstration activities aimed at building a bridge between agricultural stakeholders and other key sectors impacting and impacted by nutrient pollution in the basin. The addition of both grant projects add to the University’s research efforts currently directed towards nutrient reduction in the Lower Fox River basin and the bay of Green Bay. 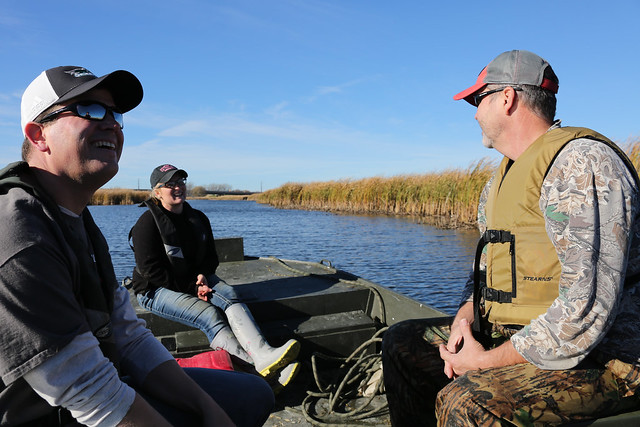 Patrick Robinson (adjunct faculty ES&P, UWEX, office in Biodiversity center) and Kevin Fermanich (NAS, Environmental Science and Geoscience) were invited speakers at the International Joint Commission’s (ILC) science roundtable — “Great Lakes Successes and Challenges: What is a Healthy Lake Michigan to You?” Tuesday, Oct. 18. Four of the international commissioners were in attendance. Robert Frost wrote that “taking the road less travelled has made all the difference.” For UW-Green Bay graduate Pamela Parish, that meant transferring schools during the second semester of her freshman year and following in the footsteps of her older brother, sister and twin who were attending UW-Green Bay. Looking back, she deems it to have been one of the best decisions she has made in her life thus far.

Parish is the the May 2016 recipient of the Outstanding Student Award presented by the UW-Green Bay Alumni Association. She accepted the award May 13 at a student award ceremony on campus.

The Alumni Association, which has been designating a single Outstanding Student Award Recipient for each graduating class since 1976, recognized Parish for her undergraduate student success and as a volunteer in service to others and the community. She was nominated and selected from approximately 930 graduating seniors eligible to receive diplomas at May commencement.

At UW-Green Bay, Parish has been active in both academic and community service initiatives. She has maximized her opportunities as a student leader on campus, serving as co-vice president of the Phi Kappa Phi Honor Society, a peer mentor for a freshman seminar class, and a teacher’s assistant. Parish was also active In the UW-Green Bay Student Government Association as a justice in the Student Court and organized both the student government debate and election.

Parish was one of a select group chosen to collaborate with Political Science faculty to work on creating a Political Science capstone course for future students. She was also chosen as the only student representative on the Political Science Faculty Search Committee. Additionally, her work on an honors in the major project looked at the connection between downtown Green Bay and the UW-Green Bay campus, giving her the opportunity to interview community leaders and report back valuable insights to inform the University’s long-term strategic plan.

In addition to the rigor of a triple major, Parish took advantage of internship opportunities with Northeast Wisconsin organizations to broaden her perspectives, learn from real-world professionals and apply her education. Roles at Downtown Green Bay, Inc. and the Green Bay Mayor’s Office were a significant part of her college transformation, developing her confidence as a leader. While in the Mayor’s office, Parish assisted with writing the 2016 State of the City Address with the Mayor and his Chief of Staff, and her internship with Downtown Green Bay has evolved into a program manager position on the staff, which will continue after graduation.

She has consistently received awards during her time on campus, including being named to the Dean’s list with Highest Honors for five consecutive semesters, being inducted into the Phi Kappa Phi Honor Society and being named as a recipient of this semester’s Chancellor’s Leadership Medallion Award.

In her spare time, Parish worked as a suite attendant at Lambeau Field on game days, volunteered at Red Smith Elementary School and supported the Love Your Melon program on campus.