Assistant Prof. Mandeep Singh Bakshi (Chemistry, NAS) published his recent article “Impact of nanomaterials on ecosystems: Mechanistic aspects in vivo” in Environmental Research. This work highlights the implications of nanotechnology on ecosystems. The article can be read here. The UW-Green Bay, Manitowoc Campus hosted its 2020 Career Expo on Jan. 8 for local high school students. Four hundred students were in attendance; 350 were freshmen from Manitowoc Lincoln High School and 50 were sophomores from Reedsville High School.

Faculty and staff led career-focused learning sessions. The Expo gave students the opportunity to learn about STEM opportunities and how to use high school classes and extracurricular experiences to prepare for college. UW-Green Bay Assistant Prof. Mandeep Singh Bakshi (Chemistry, Natural and Applied Science) recently published an article titled “Multifunctional photo-physiochemical properties of tetronic 304 in aqueous phase: Mechanistic aspects of Au(III) reduction into Au(0)” in the Journal of Photochemistry and Photobiology A: Chemistry. This work demonstrates the applications of star polymers for the synthesis of desired shape and size nanomaterials at an industrial scale.

On Wednesday, Oct. 23, 2019, Associate Prof. Amy Kabrhel (Chemistry) visited a first-grade classroom at St. Francis of Assisi Elementary School in Manitowoc, Wis. to celebrate National Chemistry Week. The 15 students learned about metals, their properties and how they react.

Sputnikfest celebrates the moment a 20-pound piece of the Russian Sputnik IV landed in the middle of the street on the corner of N. 8th and Park in Manitowoc. Readers Digest labels Sputnikfest as one of the Top Five Funkiest Festivals in the country, and this funky festival has become a fun event for families region-wide. 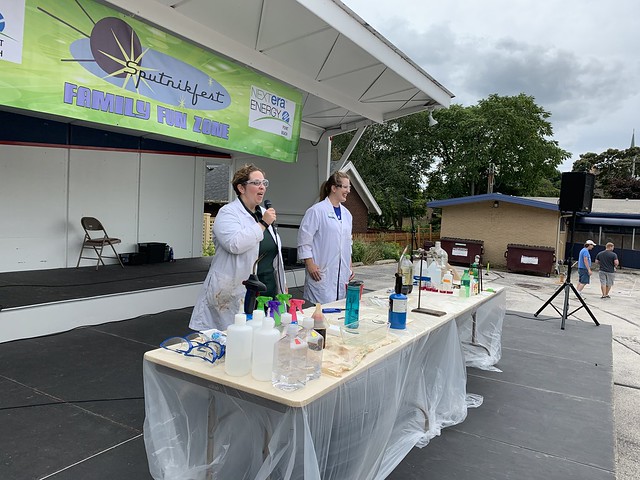 UW-Green Bay alumnus Reed Heintzkill (Chemistry) ’16 recently had his first-ever journal paper published in Surface Engineering. Heintzkill has recently started a Ph.D. program in Materials Science & Engineering at UW-Milwaukee, where he will focus on cement chemistry and nanotechnology in concrete applications. UW-Green Bay featured Heintzkill his senior year, describing his uncharacteristic path toward his college degree. He never fails to mention his appreciation of the faculty and staff members at UW-Green Bay who encouraged and mentored him.