About 150 campus and community friends gathered at the Shorewood clubhouse Monday (July 6) to honor Dan Spielmann as he retires as chancellor’s chief of staff after a nearly 40-year career as one of UW-Green Bay’s most high-profile and longest-serving administrators and faculty members.

Chancellor Gary L. Miller and former Chancellor Tom Harden shared brief remarks. Miller read from a legislative proclamation introduced by state Rep. Eric Ginrich and Sen. Dave Hansen. It praised Spielmann for his record of achievement including his service as Phoenix Athletics director during the program’s rise as an NCAA Division I contender, his role as legal counsel and policy adviser to all six chancellors, his effectiveness as a community and legislative liaison, his passion for teaching, and his involvement in University fundraising, among other contributions. The citation also noted Spielmann’s long working relationship with former Associate Chancellor Donald Harden, his association with hall of fame coaches Dick Bennett, Carol Hammerle and Aldo Santaga, and his positive interactions with individuals both on and off campus.

Spielmann was presented with gifts including the Legislature’s proclamation, a large framed aerial view of the UW-Green Bay campus and a travel bag, among other items. In expressing appreciation to the friends and colleagues in attendance, he talked about leaving his Madison legal practice as a young attorney in 1976 to join the faculty of the young UWGB… and never regretting the move despite the challenges of his new position(s). Spielmann closed his remarks by thanking Liz, his wife of 42 years, and sons Kurt and Jeff (who attended with his infant daughter). 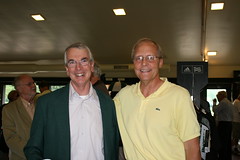