On Wednesday, Dec. 6, 2017, students from Jon Shelton’s “Craft of History” class performed a Twitter “reenactment” of the Great Green Bay Fire of 1880, which tore through what today is Green Bay’s east side and ultimately destroyed 100 buildings and led to one death. The goals of the course were to introduce students to primary and secondary source methods of historical research, and this year, each student accomplished these goals by researching the life and times of one person who was alive at the time of the fire. Students then scripted a series of tweets based on their research, and put them all together in a live performance. Students “reenacted” characters such as F.W. Spafford, the captain of the coal-powered boat Oconto; John Schumaker, a local resident whose mother died of “fright” during the fire; the fire-fighter Louis Mohr and the prominent local relief activist Elizabeth Baird.

The twitter reenactment was followed by a well-attended public lecture by Siegel in the Christie Theater on his book, Forces of Change: Events That Led to the Development of the Green Bay Fire Department.

Fox 11 was in the classroom covering the event. 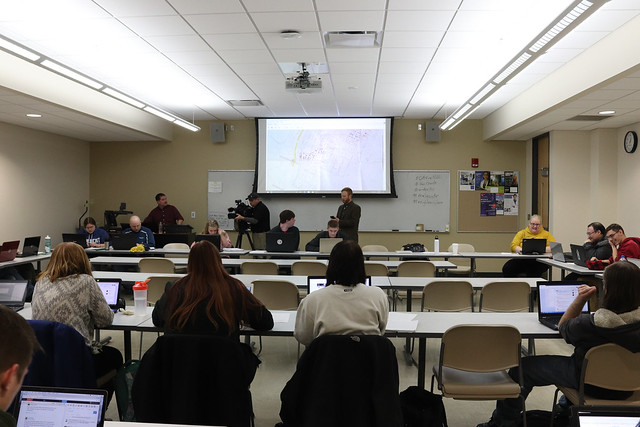