Labyrinth walk has deep significance in a year of religious turmoil

Creating and walking a labyrinth has been a capstone activity for award-winning Prof. Regan Gurung’s freshman seminar: “Gods, Ghosts and Goblins,” each year. This year, however, it may take on just a bit more meaning, and move students a bit more deeply.

“Our seminar class will be creating our own labyrinth and walking it to personify many elements of class discussion and experience first hand the wisdom of the ancients,” explains Gurung. “Given the secular nature of the experience and significant current religious turmoil and prejudices abounding, we will highlight a message of acceptance by also adding symbols of many different belief systems. It is important to be knowledgeable about diverse beliefs and respect people’s decision to pick their beliefs. Just like the rotten fruit, we should not allow one bad apple to taint the entire bushel.”

“One of the most fascinating topics of growth is belief,” says Gurung. “Humans hold many diverse beliefs and over the centuries gods, ghosts, and goblins have populated world religions, legends, and mythology. One first year seminar class focuses on answering the question of why people believe. What purpose does it serve? How do beliefs grow? This interdisciplinary class examines different disciplines such as psychology, biology, anthropology, and theology, to answer these questions.

Gurung says that at the core of most belief systems is reflection and one of the longest standing means of reflection is the labyrinth.

“Humans have used labyrinths for centuries as a means of meditation and reflection, to take a break from the world walking into its center, before walking back out into the world again (a labyrinth has only one path, unlike a maze which has many),” he explains. “In true interdisciplinary fashion, the labyrinth also blends science, art, and religion, both in the knowledge needed to create one, and in understanding the brain activity that takes place when you walk one.”

“The focus on belief reveals many communalities in purpose, and highlights that regardless of the belief is, the underlying reasons for belief and the way they came about are very often the same.

“In a world with significant ethnic and religious strife, the explorations into belief show how, for the most part, that peoples and the religions of the world are similar. Just like apples and oranges (fruits often exemplified to show difference) are vastly more similar than different, so too are the world’s major religions. And just like you do not throw out an entire bushel for one bad fruit, we should not demonize an entire religion for some extremist practitioners of it.” 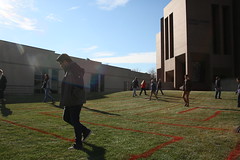