Symbolic in nature, but a ceremony renaming downtown Green Bay’s “Broadway” to “Phoenix Way” on Monday, Aug. 31, 2015, speaks volumes about the collaborative nature between a thriving city and its strong University. Green Bay Mayor Jim Schmitt and University of Wisconsin-Green Bay Chancellor Gary Miller unveiled the new sign at the traditional intersection of Broadway and Hubbard. It will remain for the week, as UW-Green Bay kicks-off its yearlong 50th Anniversary Celebration. The Mayor and Chancellor also unveiled the first of many #uwgb50 stencils, which appear across the city representing the support for UWGB by organizations and businesses. The celebration continues Sept. 2 with campus and community events, including a strong UW-Green Bay presence at the Wednesday evening Farmers Market. Alumni and general members of the public are asked to show their support by attending the market and wearing UW-Green Bay’s signature color green. The public can stop by the UWGB tent at Phoenix Way and Hubbard for give-a-ways and live music  At 6 p.m. in the Beerntsen’s Candies parking lot, Titletown Brewery and Captain’s Walk Winery will unveil new beverages that will carry a UW-Green Bay anniversary theme throughout the year. More at the50th Anniversary website. 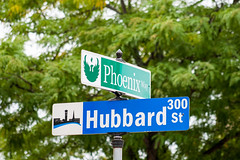