It is a wonderfully timely idea. Take advantage of a priceless collection of politically-oriented cartoons from University Archives to study the history of American political dialogue through the decades and to recognize the role of art in political dissent and commentary.

“An Age in Ink” exhibit opened in the 407 Gallery (Fourth Floor) Studio Arts, UW-Green Bay, April 3. The display is curated from cartoonist Lyle Lahey’s work, originally published online and in the Green Bay News Chronicle from 1968-2013 and now held in UW-Green Bay’s Archives and Research Center collection. Lahey’s wife, Carol Lahey, was an honored guest at the opening show’s opening. The 407 Gallery will display the exhibit through Friday, April 7.

The “An Age in Ink” exhibit was constructed entirely by students in DJS/POL SCI 349: American Political Thought, led by Assistant Prof. Alison Staudinger (Democracy and Justice Studies) and compares vintage and recent Lahey work on issues of contemporary importance — from climate change, to immigration and local urban development.

The exhibit was especially timely as it coincided with the visit of Liza Donnelly, cartoonist for The New Yorker, as part of the Historical Perspectives Lecture Series. Donnelly spent some time in the 407 Gallery with Staudinger and a few students who were thrilled to meet her in person.

“Interdisciplinary projects like this expand the capacity of both instructors and students to think differently about subjects — like political commentary — we may understand from one perspective only,” Staudinger said. “Thinking visually about politics changes what I pay attention to, and also helps me recognize the long process of collaboration that goes into every art or museum exhibit. It can be a challenge to show the applicability of political theory to everyday life, but the cartoons bridge that distance easily. We are so lucky to have such an amazing resource in our archives, and to have colleagues like Deb Anderson, archivist, and Leslie Walfish, curator, who made this collaboration possible.”

In preparing the exhibit, the class of about 35 students broke into smaller groups and dedicated themselves to archival research, with help from University Archivist Deb Anderson. They followed with historical and political research, and then began to choose from thousands of cartoons placing them in context, before working with curator Leslie Walfish to frame, mount and put on the exhibit.

“During the rest of the course, we read speeches, manifestos and arguments from the history of American political dialogue — from the Federalist Papers to the Port Huron statement and lots in between,” Staudinger said.

Visitors are encouraged to add their own cartoon to express their political voice to the “doodle for your noodle” section.

Staudinger said she is very proud of her students’ work. “Despite challenges in working together as a class of 35, many of them emerged as leaders whose skills should serve them well in their future project.”

On the invitation of Prof. Harvey Kaye, Liza Donnelly, cartoonist for The New Yorker, addressed a Historical Perspectives Series audience of about a hundred people in the Christie Theatre, Tuesday, April 4.

As a shy seven-year-old, Donnelly said she found that she could make people laugh with her drawings, and later discovered the power of visual stories and the voice of her own opinions. She presented a brief history of cartoons including examples ranging from Benjamin Franklin’s “Join, or Die” print (purportedly the first political cartoon in the United States) to her own drawings and those of her contemporaries. Her presentation included slice-of-life WWII era illustration, drawings of national sentiment in the face of tragedy, and cutting political satire, the suffrage movement, Nixon, the Clinton-Lewinsky scandal, President Trump and women’s rights.

Donnelly also touched on difficult topics like the 9-11 and Charlie Hebdo attacks and the ethical responsibility cartoonists must bear as they choose their subjects. She remarked her inspiration comes in catch phrases and media items that “bugged me” describing her work as an outlet for making sense of the world. Through it all, Donnelly also reflected on the changing landscape for cartoonists, referring to live drawing on her tablet and the creation of animated gifs distributed on Twitter and Medium. Her presentation left time for robust questions from the audience. 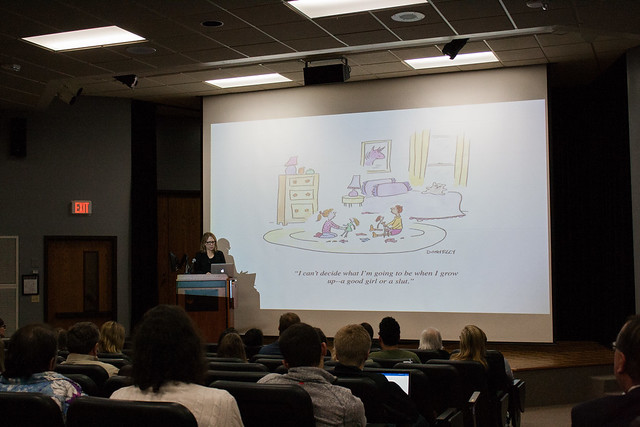