A time capsule dedication on Wednesday (Sept. 7) was a joyful conclusion to a year of celebrating UW-Green Bay’s 50-year history and an opportunity for the University to focus on the future.

“Every year, twice, we launch young people into the future, so it’s fitting today that we stand and talk about what we have now, what we might look like in the future…” said Chancellor Miller. “And hopefully, with what we put in this capsule (we demonstrate) great optimism and a great love for this university — the University of Wisconsin-Green Bay.”

Archivist Anderson said that the idea to locate the original cornerstone occurred to her when she was perusing the organizing papers of Founding Chancellor Edward Weidner. She found a memo from his facilities manager, Curt Lindem, with a hand-drawn map to the cornerstone, along with a note that indicated that this map was the only source that shared cornerstone’s location. Explains Anderson:

“(Leading up to the 50th Anniversary) facilities staff and I embarked on an adventure to find the cornerstone based on the map.  Most cornerstones are placed in exterior building walls and usually have a brick façade with an engraved date. This was not the case for UWGB. Our cornerstone was placed in the floor in the hallway between Instructional Services and Environmental Sciences buildings. It was buried under a plaque containing an excerpt from Chancellor Weidner’s speech given at the cornerstone ceremony.

Armed with the map and photos of the cornerstone ceremony, we confidently approached unearthing the cornerstone. We knew we were looking for a metal box with the designation UWGB and 1968 on it.  As with many things, it wasn’t that simple. Facilities staff Paul Pinkston, Wayne Chaloupka, Kevin Smith, and Jay Rickaby, undertook the task.  Step one, tackle asbestos. Step two, the drawing wasn’t exactly accurate in its measurements and the box wasn’t where it should be.  We were able to locate the box on the third try!

Now, none of us knew exactly what we would find when we opened the cornerstone.  News coverage in 1968 indicated there were founding campus documents; items from the city and county; and Green Bay Packers’ “memorabilia.” When we opened the cornerstone, we discovered the elements had not been kind to the contents.  We were able to identify most of the items which included an early campus map showing the envisioned growth; an initial course list; documents from the city and county indicating the strong role area leaders played in locating the campus on this site; a key to the city of Green Bay; newspapers from each of the two year centers comprising UWGB (Appleton, Manitowoc, Marinette, and Green Bay); fragments of an advertising pen from University Bank. A disintegrated box which held pen nibs (a joke)…

Oh, and that small Green Bay Packers’ memorabilia…turned out to be a souvenir plate/ash tray from the recently played Super Bowl…the famous Ice Bowl.”

Thoughts soon turned to the next time capsule, not to be opened until 2065 at the 100th Anniversary of UW-Green Bay. The collaborative effort involved many people including Heaser, Prof. Heidi Sherman, chair of the history department; Pinkston, facilities director; Brenda Amenson-Hill, former Dean of Students; student representatives from the history department and student government, and University Archives intern Sean Gleason.”

Gleason was on a committee that decided solicitation methods for content of the new time capsule, and the decision to go with one that would be ultimately located in a sealed cabinet in the Cofrin Library plaza “as a tangible symbol of UWGB history, and continuation of the cornerstone tradition.”

“The vision of the time capsule was to ensure that its contents represented the class of 2015-16 in the most universal and encompassing way possible,” Gleason remarked. “Because an egalitarian approach was desired to collect artifacts and documents, a survey was distributed across the campus community.  History Club students created a fun and creative video to promote participation in the survey.  Individuals were asked to respond to the question “When I think of UWGB I think of….”  And also to suggest objects that might represent their vision…

“As one might expect, some of the survey suggestions were wide ranging, and in some instances, wildly creative. Not everything could safely go in the time capsule or fit.  Water and soil samples for example, although well intentioned and probably useful to the future students, may be best kept away from the other contents, as we learned from our predecessors from 1968.

“Using the survey results, the Time Capsule Planning Committee, determined which items to place in the time capsule to best highlight the 2015-2016 campus to the campus of 2065. The goal was to represent a broad spectrum of the campus and to have some fun at the same time. Hence, you will see representation of geese, trees, and bit of tradition in the form of blue shag carpeting! We also planned ahead…in case the shoe tree is still standing, the time capsule includes a par of Adidas athletic shoes, ready for the throwing! (And the Green Bay Packers donated a Cullen Jenkins autographed Super Bowl back-up jersey).

“One of the most promising and meaningful ideas to go into the time capsule work, was a series of letters.  Individuals in key roles around campus, academic chairs, and executive boards of student organizations were asked to pen a letter to their future counterpart. The premise of the letter was that individuals opening the time capsule in 2065 could gain insight from the past, and make a unique personal connection to a stranger who was once in their shoes.”

Gleason said it was an honor to speak on behalf of students who works so hard to put the capsule together, and that he looks forward to its opening in 2065.

Finally, founding Phoenix soccer Coach, and Chair of UW-Green Bay’s Council of Trustees, Lou LeCalsey III, described what has been like from a community perspective to watch the growth of the University over the past 50 years:

“My reflection on the beginning of this university is that in 1965, Green Bay was selected as the place for the newest UW campus after hard-fought effort between locations here and the Fox Valley,” he said. “The community and its leaders vigorously advocated for and demonstrated understanding of the potential and importance of a UW campus to the economic/social and educational success fo this community and region.”

“My office was in the former cottage of Curly Lambeau down by the water and Chancellor Weidner’s office in a farmhouse on the property… more importantly, to was so memorable to be with a faculty so energized and excited about the chance to put into place a unique curriculum built around a concept called ‘interdisciplinarity’…

…As we look toward the second 50 years for UWGB, it is my privilege and opportunity to work with all out Trustees, our great faculty, and Chancellor Miller, along with his staff and leadership team, to help enable the actualization of Chancellor Miller’s Vision for the future… a vision based on the cornerstone concepts of transformation, innovation and place… Those concepts form the blueprint for this university to move to a position of even more importance, influence and being a key determinant to the growth and economic/social and educational success of this community, our region and this state.

…I believe…our UWGB will be viewed in 2065 as the recognized benchmark for higher education excellence among all public regional comprehensive university in this state and, indeed, in this nation.”

The time capsule was sealed by the Kevin Smith and Wayne Chaloupka, members of UW-Green Bay’s facilities staff, who also designed and built the cabinet supporting the new time capsule. 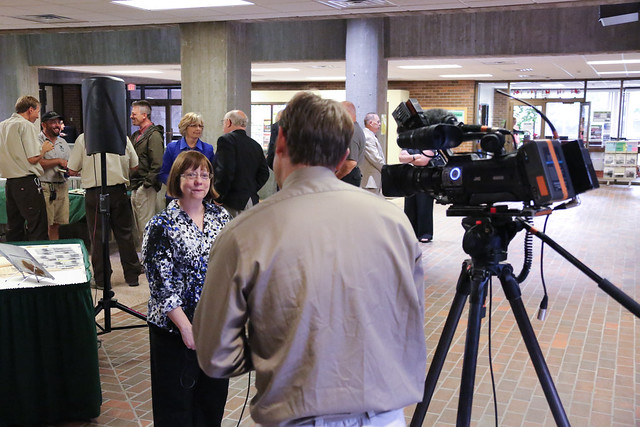