“At its climax, the concert was like a Major League Baseball game with a star pitcher firing 105 mpg fastballs, wicked curves, nasty sliders and whiffable knuckleballs one after the other. True hardball.” This was the response from arts critic Warren Gerds about the University of Wisconsin-Green Bay’s Jazz Fest last weekend.

UWGB Prof. Adam Gaines took over the directorship of the festival this year, while Prof. John Salerno is on sabbatical. Providing new energy was a change in format, allowing the high school jazz bands to play on stage during the evening concert at Weidner Center.

“Chuck Dotas is a great jazz educator,” said Linda Parins, administrative specialist for UWGB Music & Theatre. “He spoke to the high school students and directors like they were his own students. Cofrin Hall suddenly became an informal, intimate space.”

The high-energy concert featured the five high school bands, followed by a “fabulous performance” from the National Guard’s 132nd Patriot Jazz Band. Capping the evening was the NEW Jazz All Stars, making their debut that evening and playing arrangements by Dotas. See the press release. 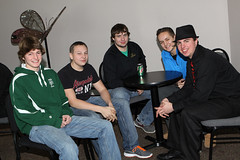