UW-Green Bay’s entry in the Green Bay Holiday Parade earned honors for the second straight year. UWGB’s small committee of determined volunteers received the Mayor’s Award for “most original.” UWGB’s float theme was “Every time a bell rings, a Phoenix gets its wings.” The theme of the parade was “Sounds of the Season.” In celebration of UWGB’s 50th Anniversary, UWGB Chancellor Gary Miller and Georgia Miller served as parade marshals. With help from the Green Bay dance and cheer teams, student-athletes, alumni, Phuture Phoenix and family of UWGB employees, more than 50 people marched together, handing out candy and celebrating with the projected 10,000 plus in attendance. The Parade Committee also used the float for a service opportunity, collecting hundreds of school supply donations from UWGB faculty, staff, students and administrators, and local businesses, which will be donated in the weeks ahead to students in the Green Bay public schools. 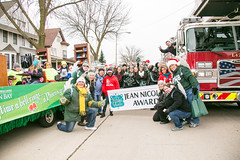 – Photos by Kimberly Vlies, Office of Marketing and University Communication