Waterfront Design: Urban and Regional Studies students asked to polish a diamond in the rough Past the Zippin Pippin and the Sea Dragon, beyond the Ferris wheel and the bumper cars, away
from the crowds and squeals of delight at Bay Beach, UW-Green Bay’s Urban and Regional Studies students envisioned a waterfront diamond-in-the-rough that could become one of the city’s crown jewels. The students were part of Associate Professor Marcelo Cruz’s Waterfront Design and Visioning Project, a studio design course based in the Department of Public and Environmental Affairs. Working with the City of Green Bay and a group of waterfront stakeholders, they prepared a plan that would connect the Green Bay community to the waterfront area adjacent to Bay Beach.

“The waterfront district is an area of keen interest to us,” said Wendy Townsend, Green Bay’s programs and projects manager. “It’s not unusual for port cities like ours to have a strong industrial presence on their waterfronts. That’s the primary role they filled as these cities developed. Over time, the waterfront’s historical commercial/industrial role has changed. Port cities are now looking at ways to bring people back to these predominantly industrial corridors. “In our case,” she continued, “we have a world-class sport fishery right here, with limited access to it and no on-site infrastructure to support it. We also have waterfront property we can use much more productively. The community and economic benefit of repurposing this property is great. In many ways, water is the new gold.”

The value of the waterfront was echoed by Chip McDonald, co-owner of South Bay Marina and a community representative on the project team.

“We are very committed to helping our community access the great amenity of Green Bay,” said McDonald. “It is a true blessing we need to respect and care for. All of us who work and live in this part of the city greatly appreciate the work of everyone involved, especially the efforts of the instructors and students, and the support of the city, county and NEW Water.” “There are already projects underway in and around Bay Beach,” said Cruz. “After talking with Wendy, it was decided that we would assist them to develop ideas for 377 acres of waterfront connecting Bay Beach, Renard Island and South Bay Marina.”

“This project fit well with the University’s desire to be part of the community and gives students the opportunity for hands-on learning,” he continued. “Students learned urban design principles and environmental design concepts as they developed the plan for the city. The project involved students from pubic administration, history, environmental science, environmental planning and design, political science and urban and regional planning.” The students were completely engaged in the process.

“It is satisfying to know that I have real-life experience in the planning world,” said Breanne Rasmussen, a senior studying Environmental Policy and Planning. That’s a sentiment echoed by other students in the class. “It’s exciting to know that what I’ve done in this class can potentially be implemented in the future. I’ve come to appreciate how important planning tools are and how they help people perceive their environment.” Making that connection is central to the project, according to Cruz. “Our urban design focus was on place-making and connectivity within the project area,” said Cruz. “We worked with property owners in the area to envision what was possible. Chip McDonald led us on a three-hour tour of the entire project area. Our eyes were really opened!

“We worked with Mr. McDonald and the other stakeholders from Bay Beach, NEW Water, the Port of Green Bay, Wisconsin DNR and the City of Green Bay to gather their ideas and visions for the space, we synthesized those into what we called the Phase One visualization, which we presented to the stakeholders in early March for feedback. With that feedback we created the Phase Two visualization and prepared our final presentation to stakeholders.” “They made our (development) job a lot harder and more fun at the same time,” Townsend said. She pointed to the students’ innovative ways to reconnect elements of land already there and recommendations for elements that are relevant to the space and meaningful to the public. Among these are three residential areas, ideas for bringing in new business opportunities, including a hotel and dedicated retail space; creating a bike trail, a boardwalk and water-specific educational features; establishing public access to waters that can’t be used now. It also included carving out family-friendly areas on Renard Island, with picnic tables, disc golf, an observation tower and an amphitheater; and creating a more welcoming “front door” where I-43 exits onto Webster Avenue.

“Conceptually,” said Cruz, “we want to create a space that has specific places for the public to live, work and play, transforms the uses of the area, enhances public accessibility and is sustainable and innovative.”

In short, a waterfront gem that truly sparkles.

“I feel we, as a public university, have an obligation to improve the quality of life in the communities around us.” ~ Dr. Marcelo Cruz

At UW-Green Bay, Associate Prof. Marcelo Cruz has invested in this philosophy — from The Broadway District in Green Bay to the streets of Tena, Ecuador. As a college student in England in the unsettled decade of the 70s, he came to believe that a university should be more than a place to educate professionals for their careers. He felt it should play an important role in the communities around it.

He carried that philosophy into teaching at the University of California Los Angeles and, 22 years ago, to UW-Green Bay. This deep sense of obligation to the community has brought benefits to everyone involved, and to many Northeast Wisconsin communities.

“The community gets the benefit of some great, creative minds and the students get the benefit of hands-on education,” said Cruz, who earned a doctoral degree in urban planning at UCLA’s Graduate School of Architecture and Urban Planning. “We’ve even taken this internationally, when we developed a comprehensive plan for Tena in the Amazon. It was a marvelous experience to see our Wisconsin students interact with students from Denmark and Spain. We all grew from that experience, just as we grow from every engagement like that.”

Here’s a partial list of the projects and communities in which Cruz and his students have been involved: 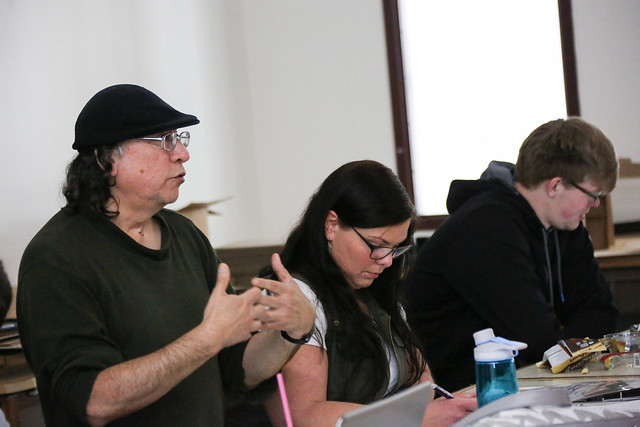