Sarah Meredith Livingston and Jiebing Chen are women who dare. Like many artists and musicians they bash through barriers and tell themselves, “yes” when others say, “It can’t be done.”

Meredith Livingston, a mezzosoprano and professor of music at UW-Green Bay was the presenter at UWGB’s After Thoughts series, Tuesday, April 5 at the Weidner Center for the Performing Arts. In her “Women Who Dare,” presentation, she shared a bit of personal testimony and highlights of the lives of five amazing performing artists: Hildegard von Bingen, composer and visionary; Clara Schumann, concert pianist; Antonia Brico, conductor; Isadora Duncan, dancer/choreographer; and Marian Anderson, an African American singer, who fought to break the race barrier at performance venues in the United States.

Chen, an international artist hailed as one of the foremost erhu virtuosos in the world, was a guest artist of Meredith Livingston’s. Chen made a decision to join the Chinese military at age nine with hopes of eventually continuing to perform the erhu professionally. The move would improve the quality of life for her family. Little did she know that she would have to train as both a soldier alongside adults and continue her training as a musician. She now resides in Green Bay but continues to travel the world playing both a classical Chinese repertory and contemporary innovations on the two-stringed instrument, which has been a part of the Asian culture since the Han dynasty (140 B.C.).

Meredith Livingston presented in Fort Howard Hall of the Weidner Center for the Performing Arts to accommodate Wisconsin Public Television’s University Place recording (to air at a later date).

An Iowa native, Meredith Livingston is a current UW-Green Bay professor of Music, Women and Gender Studies and Global Studies. She received degrees from Iowa State University, (Bachelor of Science, Bachelor of Music), Northwestern University, Evanston, Illinois, (Master of Management, Music of Education/Voice performance), Hochschule fur Musik, Hamburg, Germany (Auslander Diplom), and the University of Iowa, Iowa City, Iowa (Doctorate of Music Arts, Voice performance/opera). Throughout Europe, the U.S. and South America, Meredith Livingston, mezzosoprano, has performed as a soloist, recitalist, masterclass teacher and adjudicator. For the last 23 years, Meredith Livingston has organized student and faculty groups to perform in Canada, Ukraine, Poland, Romania, Slovakia, Germany, Czech Republic and Brazil. She is the founder and director of the Montreal International Czech/Slovak Voice Competition, distinctly noted as being the only competition promoting Czech/Slovak music in the U.S.

Now in its fifth full season, After Thoughts seeks to connect members of the community with UW-Green Bay. The gatherings showcase talented women among University faculty, staff and alumni, and convene men and women after their workday for learning, enrichment and fun. This was the final After Thoughts presentation of the 2015-16 academic year. 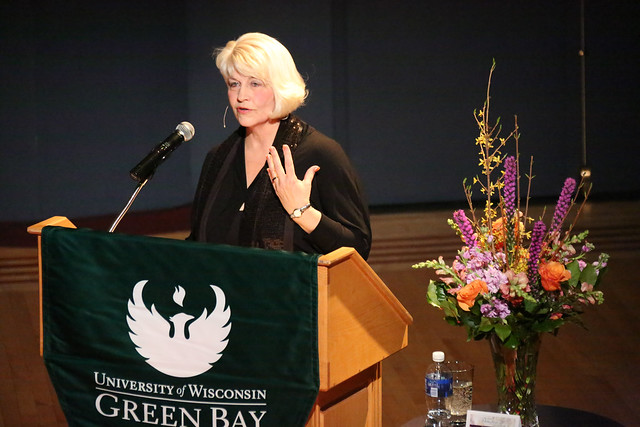