University of Wisconsin-Green Bay, Sheboygan Campus adjunct faculty member Tricia Marton is on to something. What started as an idea to help her students learn about Music Theory has become a published board game now in demand by local music students and educators.

“I was, and am, overwhelmed at the response to ‘It’s JUST Music Theory,’” Marton says. “For my first order I purchased 20 games and I kept one for myself. I sold four before the Wisconsin Music Teachers Association (WMTA) Conference to people who had known about the process. I brought three boxes of games to conference with the hope of bringing only one box of games home. As several teachers sat and played, we laughed, we had more musical conversations about terms and they were excited to purchase the game to share with students. Another vendor, whose daughter is a student at UW-Green Bay, purchased the game for his daughter at conference. (The daughter) wanted him to leave the conference and bring it to her straight away! I have several paid orders for the next batch of ‘It’s JUST Music Theory.’ I have also partnered with Dreams Unlimited (Plymouth) for a Game Night and to sell ‘It’s JUST Music Theory.’” Referrals and reorders have come swiftly.

Marton is the owner and operator of a music studio in Sheboygan. She began teaching beginner piano, elementary piano and applied piano lessons for the Sheboygan Campus in fall of 2018. She also accompanies the University Choir.

The idea came out of preparation for her students. She explains:

“Each year, 15 to 20 students from my studio will participate in the WMTA District Auditions. Students perform solo works and take a theory test. If the students receive good marks on their solos and theory test, they can advance to the state competition. The theory tests have eight levels that become progressively more challenging. When the student completes all eight levels of the theory test, they are ready for a college music theory class. The tests require specific skills, and each year I would compile information from different sources to help students prepare. These sources all present wonderful material, but at times the material is not geared to the specific questions asked on the WMTA theory tests. I found myself creating worksheets and games for students, as well as researching more options that tested certain skills to expand on the texts that I used. I wanted a resource that was fun, interactive and the students had to be able to do everything.” Marton turned to her daughter, Chelsea Marton Goakey ’17 (formerly UW-Sheboygan, Accounting) to create the board game. “She’s a fabulous artist and loves games,” Marton said. “We worked together to create a game board and game play… I showed this board game to a couple of friends, and as soon as I opened the board, absolutely everyone would gush about the design. So, I knew that was a winner. On a fluke, I took the game to The GameBoard in Sheboygan to see what they thought. I didn’t have an appointment, I just stopped by. Owner Lynne Potyen took my first board and cards home over the weekend and came back with an extensive list of things to fix. Even though there was lots to fix, she took me seriously and thought the game was a good idea. That was when I decided to seriously consider producing the game. Lynne also gave me the name of a game manufacturer, and I began to research pricing and production.”

Marton hired graphic designer Marie Hetzel to turn her daughter’s design into electronic art. Meanwhile, Potyen and Marton invited groups of teachers to play the improved “Its JUST Music Theory,” taking copious notes on areas that needed improvement. “During one game session, I gave the teachers my rules book and let them play the game. It was really difficult for me not to talk them through the process…so I made popcorn instead. What I saw throughout this process were that many people were excited about this product.”

Games are available through Dreams Unlimited in Plymouth, Wis.

The Green Bay volleyball team (18-10, 13-3 HL) claimed its first-ever Horizon League Regular Season Championship last weekend with a comeback win in five sets against the UIC Flames (17-12, 10-6 HL) at home on senior day. With the championship, the Phoenix earns the right to host the 2018 Horizon League Volleyball Championship at the Kress Events Center,  this weekend, Nov. 16-18. Green Bay will get a bye into the semifinals and will play Saturday afternoon at 3 p.m. against the lowest remaining seed. See ticket prices and the full bracket.

The UW-Green Bay Office of Financial Aid is collecting applications for the Albert Einstein and Mahatma Gandhi Scholarship, which recognizes students with a talent for research activities. To qualify, applicants must be a full-time UW-Green Bay undergraduate with at least junior standing and a minimum 3.50 cumulative GPA.  Faculty and staff are encouraged to refer eligible students to the application form on the Scholarships website (submissions are due December 3, 2018). $750 will be distributed to one student for the Spring 2019 semester.

The Phoenix Rooms at UW-Green Bay held a standing-room only crowd to honor campus and community veterans and active service members on Monday, Nov. 12, 2018. The late-afternoon event included a Presentation of Colors by the UW-Green Bay Color Guard, the “Star Spangled Banner” and “Armed Forces Salute” by UW-Green Bay Music and remarks by Chancellor Gary L. Miller, Congressman and retired Marine, Mike Gallagher, and Sergeant Nathan Preder ’12, who leads UW-Green Bay Army ROTC, read the meaning of the POW/MIA table. Also recognized were current student/soldiers and current donors and recipients of veteran scholarships. Serving as emcee was student Ryan Leurquin. Vets 4 Vets President Nic Cravillion recognized the efforts of the student organization for community outreach including a Vets 4 Vets donation to the Brown County Veteran Court. On behalf of the club, he also recognized and thanked Jim Belongia for donating the proceeds from the City Stadium Run to the UW-Green Bay Veteran Lounge. 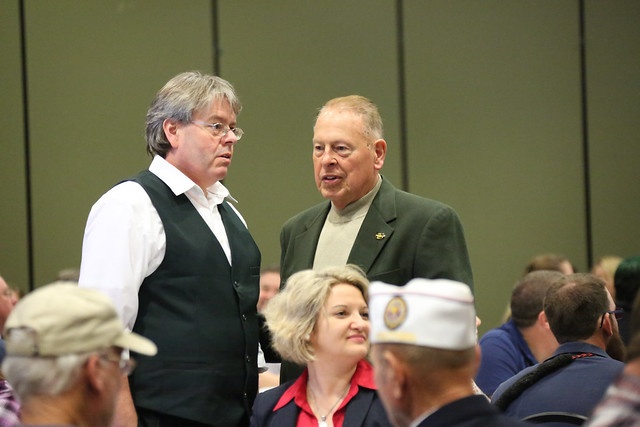