The final performances of “Women Playing Hamlet,” presented by UW-Green Bay Theatre, will be Wednesday, Mar. 6, 2019 through Saturday, Mar. 9, 2019 at 7:30 p.m. in the Jean Weidner Theatre, Weidner Center.

“Hamlet is a challenge for any actor, but when Jessica is cast as the title character in a NYC production she endures the “slings and arrows” (and advice) of dubious experts, in addition to making Sir Patrick Stewart her nemesis. Can she figure out “to be or not to be” by opening night? Women Playing Hamlet is fun for Shakespeare fans and everyone else. ” Learn more and purchase tickets.

UW-Green Bay’s Theatre and Dance production of ‘Women Playing Hamlet‘ has received a glowing review, being dubbed a “right smart piece of theater.” The play will continue this week, with performances on Wednesday, Mar. 6, 2019 through Saturday, Mar. 9, 2019 at 7:30 p.m. in the Jean Weidner Theatre, located in UW-Green Bay’s Weidner Center. Read the show’s full review.

UW-Green Bay Theatre and Dance  will be presenting “Women Playing Hamlet” on Feb. 28, March 1-2 and 6-9 at 7:30 p.m. at the Jean Weidner Theatre, Weidner Center. “Hamlet is a challenge for any actor, but when Jessica is cast as the title character in a NYC production she endures the “slings and arrows” (and advice) of dubious experts, in addition to making Sir Patrick Stewart her nemesis. Can she figure out “to be or not to be” by opening night? Women Playing Hamlet is fun for Shakespeare fans and everyone else. ” Learn more and purchase tickets.

UW-Green Bay Theatre Studio Productions and Alternate Theatre present “The Assassin’s Anthology,” written and directed by UW-Green Bay student Selena Deer (Theatre, Communication). The play will be performed on Thursday, Dec. 6 through Saturday, Dec. 8, 2018 at 7:30 p.m. in the Jean Weidner Theatre at the Weidner Center. It focuses on nine assassins who live together on an estate, each with their own specialty. Recommended for ages 12 and older. Admission is free, but seating is limited. Learn more.

Critic-at-Large Warren Gerds was entertained by the UW-Green Bay Theatre and Dance presentation of Oscar Wilde’s “The Importance of Being Earnest.” “It’s fun to be in an audience that gets it… gets the humor of Oscar Wilde as it rolls out subtly, wryly and oh-so-cleverly like waves lapping on a shore. Such an experience was at hand Saturday night in a full Jean Weidner…” Read his review.

GREEN BAY – The University of Wisconsin-Green Bay Theatre presents Oscar Wilde’s famous play The Importance of Being Earnest at 7:30 p.m. Feb. 23 to 25 and Mar. 1 to 4, 2017 in the Jean Weidner Theatre of the Weidner Center for the Performing Arts. The play will be directed by UW-Green Bay Theatre and Dance Prof. John Mariano.

Set in London and the English countryside during the late 19th century, The Importance of Being Earnest is a both a whimsical romantic comedy and a sharp-witted satire of Victorian society. The story follows two young gentlemen, Jack Worthing and Algernon Moncrief, under the guise of a “fictitious” brother named Ernest as they seek the love of the ravishing Gwendolyn and an attractive ward, Cecily. All goes well until both couples end up at the same country estate.

Prof. Mariano says the play is one of his favorites. “Oscar Wilde is a fascinating figure and this play is his masterpiece,” said Mariano. “Wilde elevates the British comedy of manners to its greatest heights. The play has been produced around the world since its first production and continues to shine its comic light on the distance between our public image and our private selves.”

Mariano says one of the great things about his job is that he gets to tackle projects that give him the opportunity to work with students on enduring pieces of theater like this brilliant and very funny play.

Tickets are $20 for adults and $15 for senior citizens and UW-Green Bay students. Purchase tickets now at the University Ticketing and Information Center, online at http://www.ticketstaronline.com/events/detail/the-importance-of-being-earnest or by calling 920-465-2400. GREEN BAY – The University of Wisconsin-Green Bay Theatre and Dance programs will present a new play by Pulitzer-nominated playwright Lee Blessing. The Hourglass Project will be presented in seven shows, Feb. 25-27 and March 2-5, in the Jean Weidner Theatre at the Weidner Center for the Performing Arts, 2420 Nicolet Drive, Green Bay. All shows begin at 7:30 p.m. General admission is $18 per adult, $15 for seniors and $10 for UWGB students.

The Hourglass Project has been described as a “comedy of anxiety.” In the play, a small number of elderly people, some close to their mortality, are given a chance to start over. They have given their consent to a highly unorthodox and potentially life-ending medical experiment. The play begins with a group of 20-somethings on a private island reacting to the consequences of these medical experiments and the profound ethical questions that one might not consider when offered such a life-changing opportunity.

“One of the great challenges for theatre programs across the country is that college students are always asked to perform characters that are much older. In the theatre business, when a production needs a 60-year-old character they hire a 60-year-old actor or at least an actor much closer in age,” says Prof. Jeff Entwistle, the scenic and properties designer. “It is not that portraying and understanding older characters is something a younger actor can’t understand, but there is a physical quality that is virtually impossible to hide from only 10 feet away. The Hourglass Project offers university actors a wonderful array of complex elderly characters whose youthful bodies simply belie their life experience and wisdom or lack thereof. A play like The Hourglass Project is perfectly suited to university production. I might imagine that once this play is published it will continue to be produced by universities everywhere.”

Playwright Lee Blessing will be working with the UWGB leading up to opening night, an exciting development for cast and crew, according to Entwistle.

“Lee Blessing is quite possibly the most significant theatre guest artist that has ever visited the UW-Green Bay campus. An acclaimed playwright, his plays have premiered at the Manhattan Theatre Club, the La Jolla Playhouse, Yale Repertory Theater and the Actors Theater of Louisville among others, and have been performed at the O’Neill Playwrights Conference in six different summers.”

Blessing’s play, A Walk in the Woods, was performed on Broadway and in London’s West End and was nominated for both Tony and Olivier Awards, while also receiving a nomination for the Pulitzer Prize in drama. It was also made into a film for television. Blessing is the author of more than 30 plays and screenplays.

The connections to the work of Blessing and his wife, Melanie Marnich, run deep at UWGB. UWGB Theatre and Dance also produced Blessing’s Two Rooms in February of 2000 directed by John Mariano. In 2013, Mariano directed Marnich’s play These Shining Lives. 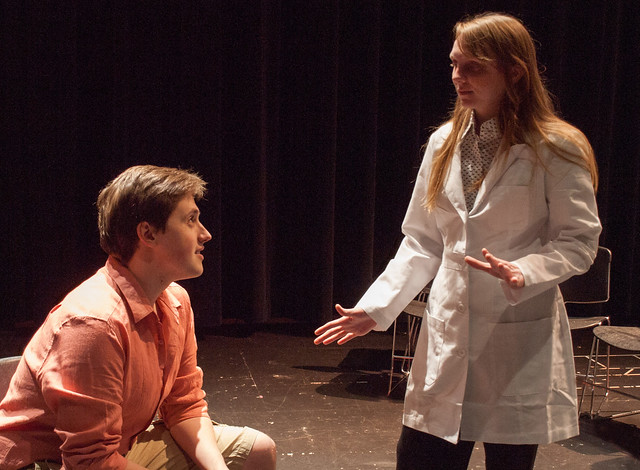 – Photos by Dan Moore, Marketing and University Communication and submitted by UW-Green Bay Theatre and Dance

The cast and crew:

University of Wisconsin-Green Bay Theatre and Dance presents the comedic drama Theophilus North, a Jazz Age tale based on a semi-autobiographical story by Thornton Wilder, as its first production of the 2015-16 season.

The performances of Theophilus North will take place Thursday through Saturday, Oct. 15-17, and Wednesday through Saturday, Oct. 21-24 at 7:30 p.m. each evening in the Jean Weidner Theatre at the Weidner Center for the Performing Arts on campus, 2420 Nicolet Drive. General admission prices at the door are $20 for the general public and $17 for seniors and students (discounted to $18 and $15 if purchased in advance). Tickets for currently enrolled UW-Green Bay students are $10.

Set in 1926, the play follows 30-year-old Theophilus North, who quits his teaching position in New Jersey and embarks on a quest for fun, adventure and his place in the world. When his used car breaks down, leaving him stranded in Newport, Rhode Island, Theophilus takes on odd jobs in houses of the wealthy.

The title role in the student production will be played by junior Evan Ash, a double major at UW-Green Bay and the recipient of the Irene A. Shewalter Memorial Scholarship for Theatre.

When asked about the role, Ash said, “I identify most with Theophilus, and I instantly fell in love with the journey he and the rest of the characters take during the show…The part I enjoy most about playing Theophilus is being able to project his aura of kindness and good-hearted nature and his willingness to help anyone.”

Theophilus North is written by Matthew Burnett based upon the semi-autobiographical final work of Wilder, the Pulitzer Prize-winning icon of American literature. The production is directed by Associate Prof. John Mariano.

For more information about this event, call 920-465-2944 or visit the Weidner Center website.

The romantic comedy ‘Months on End’ begins its second week in the Jean Weidner Theatre with a performance Wednesday (March 4) and continuing nightly through Saturday (March 7). Curtain time is 7:30 p.m. each evening.