UW-Green Bay women’s basketball player Frankie Wurtz catches up with NBC26 on what she is doing now that her basketball season is over. More via YouTube video: Catching up with Frankie Wurtz | NBC26.

It probably would be a good time for University of Wisconsin-Green Bay men’s basketball coach Linc Darner to take his dogs on a few more walks.

Or maybe for women’s basketball coach Kevin Borseth to go on a couple of extra fishing trips.

There isn’t quite as much to do these days after the NCAA recently enacted a dead period for recruiting that will go until at least April 15, and perhaps much longer, because of the coronavirus.

There are no in-person visits to make. No games on the AAU circuit to watch. Prospects can’t come on campus and coaches can’t go to their homes.

Even the Kress Center on UWGB’s campus, where Phoenix players work out and put up shots during the offseason, has closed its doors for the next month.

Green Bay Athletics recently added two more names to its “Top 50 Most Influential Leaders in Green Bay Athletics History” list. Chari Nordgaard played for the Green Bay women’s basketball team from 1995-1999. Nordgaard is still the program’s all-time leader in scoring, with 1,964 points, career scoring average at 16.9 points per game, free throws attempted and made and holds the all-time program record for single game scoring at 38 points. She also was a standout academically, making the Academic All-American First Team. Nordgaard went on to play professionally in Greece and was inducted into the Green Bay Phoenix Hall of Fame in 2005.

A big week is ahead for Green Bay men’s and women’s basketball. The women’s team secured the No. 2 seed and byes into the Horizon League Tournament semi-final next week with a 20-point victory over Youngstown State last weekend. Although the opponent is unknown, the women’s team will play on Monday, March 9, 2020 at 1:30 p.m. (CST) in Indianapolis. The game is available to stream on ESPN+. A win would secure a place in the championship game on Tuesday, March 10 at 11 a.m. It will be shown on ESPNU.

Meanwhile, the Green Bay men defeated Cleveland State last weekend, earning the third seed in the Horizon League Tournament. The team will play on Thursday, March 5 at 7 p.m. at the Resch Center, although the opponent is yet to be determined. Tickets can be purchased here. With a win, the team would advance to the semifinal round on March 9 in Indianapolis on ESPNU, with the championship game on March 10 on ESPN. While the University of Wisconsin-Green Bay’s 2020 Homecoming Week is in the books, it produced memories that will go down in history. Notably, the recipients of this year’s Alumni Awards, as well as two thrilling victories by the men’s and women’s basketball teams to as they enter into the Horizon League Tournament.

UW-Green Bay students, alumni, staff/faculty and fans/friends celebrate their Phoenix Pride by joining in the fun at Homecoming 2020. Following window decorating, a declaration by the Green Bay Mayor, and other activities, Krash the Kress ended the week and didn’t disappoint. The double header and tailgate between game was enjoyed by students, alumni, fans and members of the community, jamming in the Kress Events Center to cheer-on both Phoenix teams. See all the fun in the Homecoming 2020 video! Plagued by injuries earlier this season, the Green Bay women’s basketball team is finally putting it all together. The Phoenix beat Cleveland State in a rare mid-week day game, Feb. 27, 2020, to accommodate nearly 2,000 screaming local school children and another 1,500 fans, at one of arguably the loudest victories in Phoenix history. On Saturday, in front of a jam-packed Krash the Kress and Homecoming 22020 crowd, UW-Green Bay stormed to a 20-point victory over Youngstown State to secure the second seed in the Horizon League Conference Tournament in Indianapolis.

The team has won six straight and 10 of its last 12 games, while improving to 13-5 in the Horizon League. With the victories, Green Bay punched its ticket to the Horizon League Tournament semifinals and will wait until Monday, March 9 to take the floor at the Indiana Farmer’s Coliseum, Indianapolis. 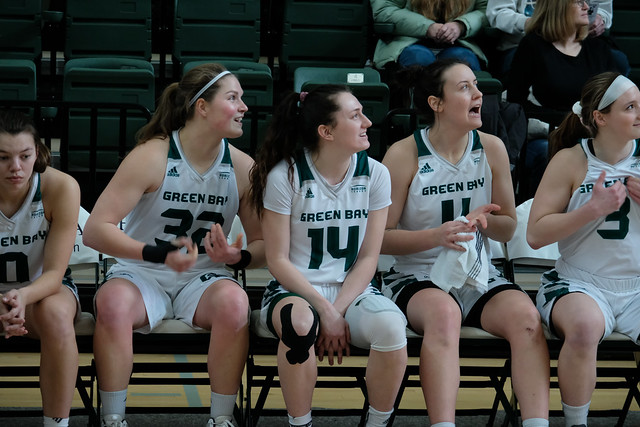 With just over a month before March Madness begins, Green Bay men’s and women’s basketball is looking to get into the Big Dance this year. The Phoenix men have won six of their last nine games, all against conference opponents. The team has also shown an ability to win close games, with all six of those wins being by six points or less. The team returns home Thursday, Feb. 27 against Youngstown State at 7 p.m. at the Resch Center.

Nordic skiing competes at the Central Regionals in Ishpeming, Michigan on Saturday, Feb. 22 and Sunday, Feb. 23.

After day two of the Horizon League Swimming and Diving Championships, the men sit in fifth place while the women sit in seventh place. See more at greenbayphoenix.com.