UW-Green Bay student Ashley Garza headed over to the Kress fitness center on Wednesday afternoon (Nov. 4) to spend some time on her favorite cardio machine… and walked into a big surprise at the front desk. Eight years of card-swiping each and every fitness, recreation and intramural patron allowed Kress Center staff to pinpoint Garza’s workout as the one-millionth patron visit since the facility’s grand opening in November 2007. Garza received a gift package of apparel, passes and discounts from Chancellor Gary L. Miller and Athletics Director Mary Ellen Gillespie to mark the milestone. 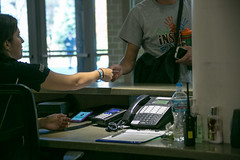 Some time Wednesday afternoon (Nov. 4, 2015), the Kress Events Center at the University of Wisconsin-Green Bay will record its one-millionth fitness-and-recreation patron visit.

Jeff Krueger, director of operations, says he and Kress staff members will pay close attention to the count Wednesday as it nears 1,000,0000. They’re planning to award a prize package with gift certificates and apparel to the lucky patron whose check-in at the front desk via card swipe accounts for reaching the milestone, almost eight years to the day since the facility’s opening.

Student fitness and recreation facilities at UW-Green Bay took a giant leap forward with the grand opening of the Kress on Nov. 3, 2007. The facility was additionally lauded for providing a suitable home for Phoenix Athletics including women’s basketball and volleyball. The $33 million project was constructed through a partnership led by students, who committed $15 million through higher fees. The state of Wisconsin provided $7.5 million in taxpayer support contingent upon the University realizing more than $11 million in community donations, with The George F. Kress Foundation of Green Bay providing the lead private gift.

Krueger says the one-millionth visit milestone is not merely an estimate. It is an actual electronic count of users — primarily UW-Green Bay students but also faculty, staff, retirees, alumni and community members — reflecting only those who enter the Kress and register at the front desk for recreation/fitness or student-athlete purposes. It does not include attendance at sporting events, commencement ceremonies, concerts, conferences or other special events.

During its busy first week in November 2007 the Kress recorded 3,764 individual user visits, a number that remained relatively constant even as the initial wave of excitement subsided. Krueger says the facility now averages between 4,000 and 4,600 user visits per week when school is in session during the cold-weather months. The single-week “record” was set with 4,719 visits recorded Feb. 2-8, 2014, a particularly bitter stretch during Green Bay’s coldest winter in a century. For the most recent academic year, the Kress Center documented usage by 3,063 unique student users. On a campus with roughly 2,000 residents in student housing, Krueger says, that figure indicates that participation by commuter students in fitness and recreation activities is significant. The 3,063 students who used the Kress at least once during the 2014-15 school year represent more than two-thirds (69.4 percent) of the 4,411 UW-Green Bay students who completed all or nearly all of their courses in person, on campus. (Another 2,000 or so UWGB students are enrolled primarily through online or distance-learning offerings.)

In 2005, before the Kress-related expansion of the cramped, outdated Phoenix Sports Center had begun, only 52 percent of respondents indicated they had used the PSC. Those familiar with the facility gave it an overall grade of 2.6 (a C+) on a 4-point scale, lowest-rated among the 20 or so services and offices listed.

In the 2014 survey, recent graduates rated the Kress highest — at 3.7 on a 4.0 scale — ahead of other well-regarded campus services including the library, computer center, student health center and American Intercultural Center, among others. Respondents familiar with the facility climbed to 65 percent.

Krueger says participation in intramural competition has also climbed dramatically since the Kress opened. Last year, 1,001 individuals took part, with most participating in multiple sports, yielding 4,021 team “participations” over the year. The latter figure is more than double the comparable number from the year before the Kress opened.

National surveys have shown that two-thirds of prospective college students say campus fitness and recreation facilities are a factor in choosing a university, and those who study student retention say stress reduction, physical fitness and the social aspect of intramurals and workouts increase student satisfaction and improve retention.

• Honors — Recognized as one of the top 20 “Most Impressive College Gyms and Student Recreation Centers” by Best Value Schools in November 2013. The Kress Events Center opened in November 2007 and represented a massive expansion of the existing Phoenix Sports Center, which dated to 1976. The $33 million project tripled the size of the old PSC (which had 75,000 square feet) to nearly 250,000 square feet. Chrisanna Colletta at the Kress Events Center is suggesting a way to start the semester off strong — “Feel empowered, reduce stress levels, increase mental clarity and bring even more quality to the life you’re living” — with techniques introduced during just one simple session. The fitness staff will be hosting a free Strength Training 101 session at the Kress from 5 to 6:30 p.m. Thursday, Sept. 4. No special gear or clothing necessary; just meet at the front desk.

The fitness folks at the Kress Center are offering a free presentation during Healthy Body Image Week. From 7:30 to 8:30 p.m. this Wednesday (Feb. 19), in Phoenix Room A of the University Union, speaker Emily Buelow, a group fitness instructor and 2014 Human Biology grad, promises to share “secrets behind accepting your already amazing self, and maintaining a happy and healthy mind and body.”