Events taking place during UW-Green Bay Veterans Week, which begins on Monday, Nov. 12, 2018 and concludes on Friday, Nov. 16, 2018, were featured in a Green Bay Press-Gazette article on Veterans Day events taking place in Green Bay and Brown County. Events at UW-Green Bay include the Chancellor’s Veteran Reception, a Veterans Employment Workshop, a ruck march and a Veteran Benefit Form. Check out the full story and learn more about the events.

UW-Green Bay will be hosting several events during Veterans Week, to be held the week of Monday, Nov. 12, 2018 through Friday, Nov. 16, 2018. Please consider bringing items or care packages to these events. (Watch your future Log posts for details.) The UW-Green Bay campus community and service people gathered Wednesday (March 21, 2018) for an open house celebrating the grand opening of the Veteran’s Lounge in its new location in Mary Ann Cofrin Hall, Room 227. A brief program began with remarks from Chancellor Gary L. Miller. Vets 4 Vets president Nic Cravillion took the podium to express gratitude to the space’s sponsors, Craig and Karen Dickman, and presented them with a gift. 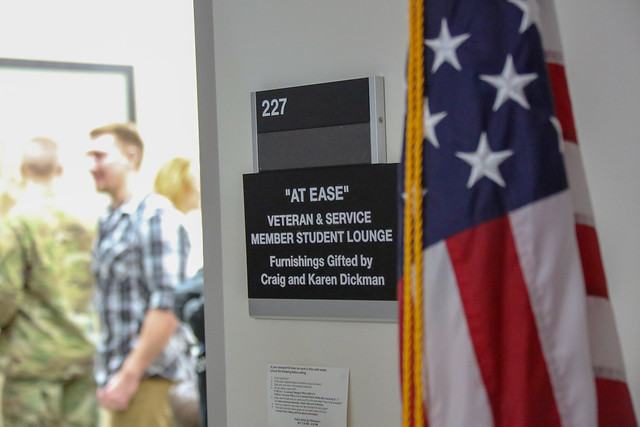 On Wednesday, March 21, 2018 join UW-Green Bay for an open house celebrating the grand opening of the Veteran’s Lounge in its new location in Room 227 of the Mary Ann Cofrin Hall from 12:30 to 2 p.m. Light refreshments will be served. Please RSVP online.

The University of Wisconsin-Green Bay will kick off a week of events celebrating campus and community veterans with the annual Chancellor’s Veteran Reception from 4 to 6 p.m. Tuesday, Nov. 11 in Phoenix Room B of the University Union on campus, 2420 Nicolet Drive.

The annual Veterans Day event is held to recognize all campus and community veterans, as well as individuals currently serving in the military. This year’s reception will feature UW-Green Bay student Major Gena Selby, who will speak about her experiences as commander of C Company in the Ashwaubenon-based 432nd Civil Affairs Battalion. Selby is working toward her second bachelor’s degree at UW-Green Bay, majoring in Art and Arts Management. Chancellor Gary L. Miller also will speak, and he and Selby will present certificates of appreciation to student members of the military who are present. Refreshments and a social will follow.

“The annual Chancellor’s Veteran Reception allows us to pause and remember the contributions and sacrifices of those who have served,” said Elaina Koltz, UW-Green Bay veteran services adviser. “This event offers the chance to express, in a very real and meaningful way, the gratitude we feel year-round.”

UW-Green Bay has 368 individuals receiving veteran benefits, including 108 dependent spouses and children. That number is expected to increase to more than 400 by the end of the academic year, Koltz said. Twenty of those receiving benefits are currently in the National Guard and Reserve. UW-Green Bay’s Vets 4 Vets student club has about 15 active members.

For six years running, UW-Green Bay has been named a Military Friendly School, an honor bestowed by Victory Media Inc. that recognizes the top 15 percent of colleges, universities and trade schools that do the most to embrace military service members and spouses as students, and to ensure their success on campus. Last winter, the University dedicated the At Ease Veteran and Service Member Lounge in Mary Ann Cofrin (MAC) Hall.

Veteran Appreciation Day, 3 p.m. Saturday, Nov. 15, Resch Center, Green Bay. UW-Green Bay Athletics invites all veterans in the community to attend the Phoenix men’s basketball game at no cost. There will be a special recognition of those in the community who made the ultimate sacrifice.

Today’s (Thursday, March 13) Ask SCORE column in the Green Bay Press-Gazette offers a bit of a different take on the conventional business plan. The piece features UW-Green Bay student Ken Corry, who was the driving force behind the new Veterans Lounge in MAC Hall. Columnist Tina Dettman-Bielefeldt explains how Corry, president of UW-Green Bay’s Vets 4 Vets Club, went about achieving his goal for such a space by creating and presenting a business plan. It worked, and the center opened one month ago Friday. Check out the column, and pics and story from the grand opening:
Green Bay Press-Gazette
UW-Green Bay News UW-Green Bay’s student veterans and military service members now have their own space to be “at ease,” thanks to a new dedicated space bearing the military-inspired moniker.

The At Ease Veteran & Service Member Student Lounge was dedicated Friday, Feb. 14 before a standing room-only crowd on the lower concourse of Mary Ann Cofrin Hall. UW-Green Bay Vets 4 Vets student club President Ken Corry, who led the efforts to establish the new center, told attendees he was elated with the space.

“It’s amazing — it came to fruition and here it is. It’s awesome,” a beaming Corry said. “I’m at a loss for words because of how awesome it is.”

Corry, an Air Force veteran, explained and demonstrated the difference between the states of alert for service members — including the well-known “at attention,” the modified “parade rest” and the further modified “at ease,” which allows conversation and a more relaxed posture.

“It’s a time for us to relax,” he said, explaining the connection between stance and center. “A time to get away from everything.”

That relaxation, and a sense of place, are critical for returning vets and others, said Elaina Koltz, UW-Green Bay Veteran Services Adviser.

“Our new veteran center will help build camaraderie among the veterans and service members here on campus, facilitating and enhancing a much-needed network of support for these students,” Koltz said. “Providing this space is one way for us to acknowledge their experience, which often differs from that of nonmilitary students — and also to thank them for their service.”

The new space was identified last year and announced during the 2013 Chancellor’s Veteran Reception on Veterans Day. UW-Green Bay alumnus, philanthropist and past commencement speaker Craig Dickman, along with his wife, Karen, donated the furnishings for the space, which is the former “grad pad” in MAC Hall 124, located near the foot of the building’s main staircase. They were on hand for the dedication and were the recipients of thank you gifts from the Vets 4 Vets student organization. Craig Dickman offered brief remarks that included an expression of gratitude and respect for the student veterans and military members.

“We’re very proud of our military-friendly designation,” Harden said. “We want to be a very hospitable, friendly and productive place for veterans who come to school here.”

UW-Green Bay has more than 400 individuals receiving veteran benefits, including 302 veterans and service members, as well as more than 110 dependents. Creation of the new veteran center is just one way in which UW-Green Bay has ramped up efforts to serve student veterans in recent years. The November Chancellor’s Veteran Reception kicked off an entire week of events including an awareness walk, volunteer organization panel, military speaker, veteran picnic and more. UW-Green Bay graduate student Mike Crum led a collection drive for homeless veterans, and members of the UW-Green Bay community wore military-insignia apparel to show support for military members and veterans.

In addition to UW-Green Bay faculty, staff, students, administrators, and alumni, a number of local and state dignitaries were on hand to help dedicate the center. Among them were state Sen. Dave Hansen, D-Green Bay; state Sen. Robert Cowles, R-Allouez; and state Rep. Eric Genrich, D-Green Bay. Tim Deacy, administrator of the new veterans clinic located just down the road from UW-Green Bay, also was on hand for the celebration.

WLUK, Fox 11 News also was on hand for Friday’s reception and dedication, capturing footage and speaking to Vets for Vets president Corry about what the center means for students. “To have a place, to have a veterans resource center, to have a place where vets can hang out — that’s what this place is like,” Corry said. Full story.