Lisa Fay Coutley ’04 (English) says she learned how to dream big at UW-Green Bay. Coutley is an assistant professor of Poetry and Creative Nonfiction at the University of Nebraska at Omaha. She is also a poet, essayist, teacher and editor, and in the past year, was named among UW-Green Bay’s most honored young alumni. More on Coutley.

Josh Kaurich ’07 (Masters of Environmental Science and Policy) knew he had a lot more to give, but was unsure on how to express that. At UW-Green Bay, he received guidance on how to connect learning to life. Kaurich serves as principal for Verita Energy, LLC and founded and manages Midwest Energy Procurement Solutions, LLC. More on Kaurich.

It’s been quite a year for Cordero Barkley ’09 and ’16 (Business Administration, Management), who says he came to UW-Green Bay a boy and left the campus a man. Barkley was recently named director of finance and investments for TitletownTech, having previously served Associated Bank as the assistant vice president, trust relationship manager with Associated Private Client & Institutional Services. Also in the last few months, he has been honored by the UW-Green Bay Alumni Association and chosen as a Future 15 Award recipient by the Greater Green Bay Chamber of Commerce. Barkley says the University played a fundamental role in his self-discovery. UW-Green Bay was honored by the return of six distinguished and outstanding alumni who returned to campus Oct. 2, 2018 to accept awards recognizing their contributions to campus, communities and workplace.

This year’s honorees were Daniel Keegan ’72, Sheila Kohl ’96 and ’05 and Doug Wirth ’89, each receiving the Distinguished Alumni Award; and Cordero Barkley ’09 and ’16, Lisa Fay Coutley ’04 and Joshua Kaurich ‘07, recipients of the Outstanding Recent Alumni Award.

Bios for each are available here. The ceremony took place on the Weidner Center stage, with a reception in the newly remodeled Weidner Grand Foyer. Each recipient was given a hand-made award crafted by artist and alumna Barbi Gossens ’03. 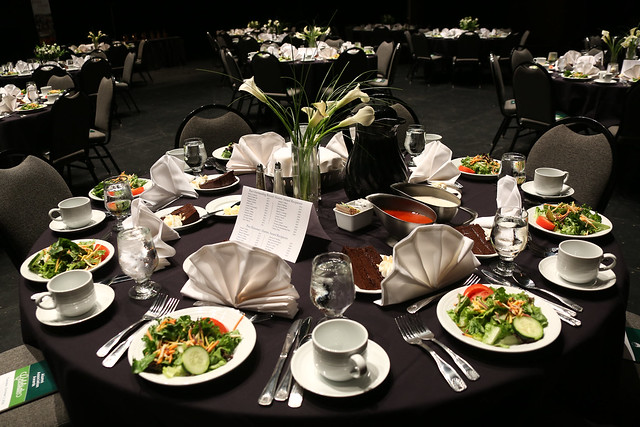 UW-Green Bay will recognize a total of five meritorious graduates at the 2015 Alumni Association Awards Night on Friday evening, Oct. 16. The program is part of the annual, two-day Alumni Days celebration, which this year coincides with UW-Green Bay’s 50th Anniversary. The list of honorees begins with Mark King, class of 1981, Barbara Nick ’83 and Dr. Jack Potts ’71, each receiving the Distinguished Alumni Award. King is President of adidas Group North America, Nick is President and CEO of Dairyland Power Cooperative, La Crosse, and Potts is among the state of Arizona’s leading forensic psychiatrists and has taught both law and social work at Arizona State University. The awards night takes place in the Grand Foyer and on stage at the Weidner Center for the Performing Arts. Open to the public, the event has tickets on sale at $35 per person. For more, see the full news release.

UW-Green Bay honors outstanding graduates at the annual Alumni Awards and Recognition Dinner, this year set for Thursday evening, May 1. The event starts with a 5 p.m. reception and social, with dinner at 6 p.m. and awards presentations to follow. The cost is $35 per person. All are welcome. (If you’d like to join us, email Kari Moody in Alumni Relations at MoodyK@uwgb.edu or, better yet, register online by this Friday, April 25).

The 2014 recipients are:
• Craig Dickman, a 1982 Business Administration grad and the founder, CEO and chief innovation officer for Breakthrough Fuel, Green Bay. Dickman has won acclaim for his innovative approach to supply chain logistics and fuel cost management. In less than a decade, Breakthrough has grown to become a partner to some of American industry’s leading brands. Dickman is the inventor responsible for two patents for energy management and has additional patents pending with the United States Patent Office. He is a member of UW-Green Bay’s Council of Trustees and Foundation Board, and in December he delivered the commencement address at.

• Constance Downs received her master’s in Environmental Science and Policy in 1996. She is a longtime administrator with the U.S. Environmental Protection Agency in Washington, D.C. Since 2011 she has been associate director of the EPA’s Toxics Release Inventory Program Division — a position that brings her into content with researchers including UW-Green Bay faculty members. Downs also led the EPA’s “E-Docket” initiative and Regulations.gov project which provide online access to all federal regulations and comments opportunities. She was previously a marketing consultant to companies in Japan, Australia, the United States and elsewhere doing business in Pacific Rim countries.

• Bob Pyle, a 1983 Business Administration grad and president and CEO of Pioneer Metal Finishing, is active in the Green Bay community in support of the University and local non-profits. He joined Pioneer in 1998 as vice president of sales and marketing, after previous experience with Fort Howard Corp. and KI. He was promoted to executive vice president in 2001 and president in 2002. Under his leadership, the company has grown from 450 employees to over 1,400. Pyle was a member of the Phoenix golf and team MVP in 1983. He is a longtime supporter of the Phoenix Fund and the Green Bay golf and basketball programs.

See photos and additional information on the Distinguished Alumni honorees.

• JoAnn Miller, who graduated in 2001 with a major in Biology and minor in Environmental Science, was the 2013 Wisconsin State Teacher of the Year. She teaches college prep biology, Advanced Placement biology, and Intro to Human Biology (for college credit with UW-Green Bay) at Oconto Falls High School. She was named her district’s teacher of the year in 2012 and was recognized statewide with a prestigious Kohl Teacher Fellowship that same year.

• Crystal Osman, a 2008 graduate of the undergraduate program in Environmental Policy and Planning, is a widely recognized ambassador for Green Bay revitalization as program manager for the non-profit business improvement districts Downtown Green Bay, Inc., and Olde Main Street, Inc. Osman, in addition to advocating for business development, has championed green space, sustainability and cultural initiatives to enhance urban life.

See photos and more on Miller and Osman.