Interim Chancellor Sheryl Van Gruensven & Dean of UW-Green Bay’s College of Health, Education and Social Welfare Susan Gallagher-Lepak invite you to lunch on Feb. 4, 2020 to learn about the power of Girl Scouting. The event is scheduled from noon to 1 p.m. in the 1965 Room, University Union. Van Gruensven serves on the board of directors for Girl Scouts of the Northwestern Great Lakes. As a life-long Girl Scout, she knows the power scouting gives to girls of all ages. UW-Green Bay has close ties to the Girl Scouts, but this in an opportunity for all employees to learn about the many ways Girl Scouts impacts the girls in this community. NEW Water and UW-Green Bay teamed up to help young Girl Scouts earn their “Wonders of Water” badge on Saturday, Nov. 9, 2019. Activities included learning about the infamous water bear microorganism and watching them swim under microscopes, learning about cleaning water by making water filters, learning about aquatic life, simulating runoff in a community through an Enviroscape activity and creating bracelets representative of the water cycle.

The event was conducted by NEW Water and UW-Green Bay student volunteers. UW-Green Bay undergraduate and graduate students helped the young visitors make water filters, and they showed them the types of fish that swim in local waters, even letting them hold some specimen. They were also shown how bugs are collected for observation, and they were given the opportunity to view some bugs in vials.

The day ended with a group photo, a snack and a video viewing. 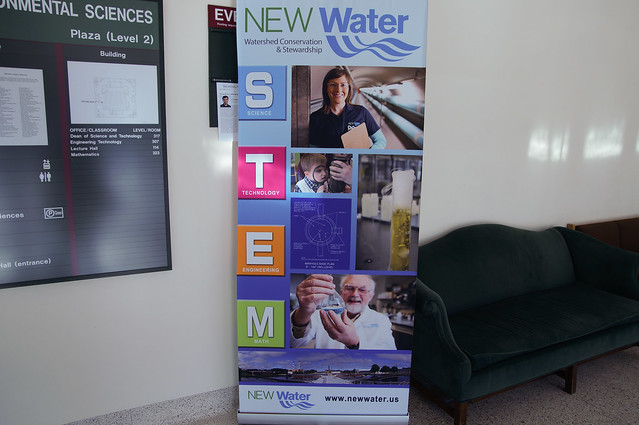 Nearly 100 Girl Scouts earned their product designer badges at UW-Green Bay, in December, with help from UW-Green Bay (Business Administration and Accounting) students and faculty. The program, “Unleash Your Inner Innovator,” put the area Girls Scouts through three team product design challenges to create new products. First, they were given three ingredients to come up with their own idea for a (sort of) healthy afternoon snack for their whiny little brother. Then, they had to use only items they brought with them and school supplies at a resource table to improve one of those products that they brought with them. Finally, they had to come up with their very own new to the world product and sketch it or map out how it worked.

The girls were mentored throughout the morning by Laura Demro and UW-Green Bay Business Administration/Accounting students Brittany Demro, Chelsea Georgia, Jocie Georgeson, former girl scout Courtney Gersek, Victoria Henderson, and Susan Xiong. When the three challenges were complete, each team of girls was coached on how to craft and communicate a pitch based on one of their three products. Each team had each girl speak into a microphone in front of the room to three “sharks” who asked them questions about their products. Questions from the “sharks” included their ideas for how to price their new product, how to get their new product to their customers, and how to promote their new product. The “sharks” — Baby Shark, Mommy Shark, and Grandma Shark — were played by UW-Green Bay students Georgeson, Xiong, and Gersek, respectively. The event was sponsored by the Austin E. Cofrin School of Business. 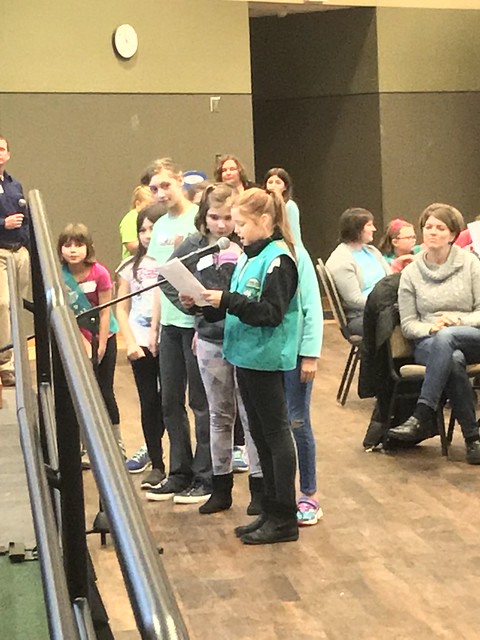 Photos and the video of the “unofficial world record for ‘Most Girl Scouts Flossing'” are courtesy of program manager of the Girl Scouts of the Northwestern Great Lakes, UW-Green Bay alumnus Brittany Pyatt ’15 (Psychology & Human Development). NEW Water and UW-Green Bay teamed up to help more than 60 Girl Scouts from around Wisconsin earn their “Wonders of Water” badge on Nov. 10.  Activities included learning about the infamous water bear microorganism and watching them swim under microscopes; learning about cleaning water by making water filters; learning about aquatic life in “Who’s in your stream?” simulating runoff in a community through an Enviroscape activity; and creating bracelets representative of the water cycle. 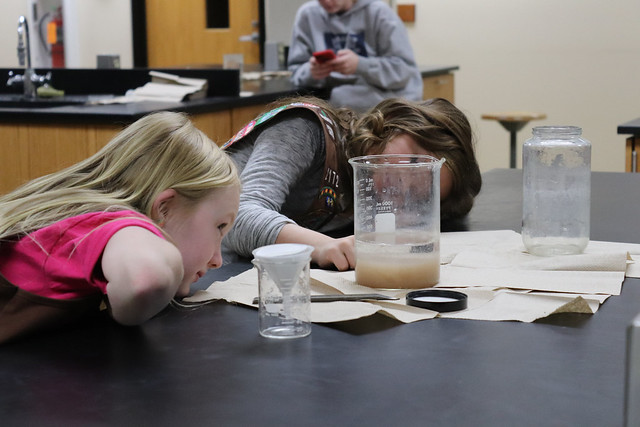 Hosted by UW-Green Bay and Girl Scouts of the Northwestern Great Lakes, a Girl Scout Wine & Cookie pairing event will be held at the Signature Lounge in the Weidner Center on Tuesday, Oct. 16, 2018 from 4:30 p.m. to 6:30 p.m. The short program begins at 5 p.m. This event provides the opportunity to learn more about the Girl Scouts organization. Kelli Strickland, Executive and Artistic Director of the Weidner Center, will be speaking at the event. Please RSVP by Monday, Oct. 15, 2018. Everyone is invited and encouraged to attend this event. Strickland’s remarks touched on the rich and diverse experiences the organization provided her — from selling cookies to Sting at the O’Hare airport and being interviewed by Dan Rather for “selling an obnoxious amount of cookies” to trips that took her to Japan, Mexico, Kentucky and Montana. Stirckland explained the significant impact the Girl Scouts had made in her life, speaking candidly about her upbringing in a one-bedroom apartment in Chicago which she said wasn’t only a “…household with little money.” It was also, with some frequency, “a household filled with violence and addiction as a result of the mental health issues of my father.”

“You know as adults that that is a recipe for a kid to fall through the cracks,” Strickland continued. “My mother definitely gets some credit. She was/is a very strong woman. But she is happy to share that credit with the Girl Scouts.”

This event has additional ties to UW-Green Bay. Vice Chancellor for Business and Finance Sheryl Van Gruensven serves on the Girl Scouts of the Northwestern Great Lakes Board. Morgan Hansen ’14, manager of events and annual giving volunteered, and two teams were comprised of UW-Green Bay staff.

Story and photos by Kimberly Vlies, Marketing and University Communication

Members of the UW-Green Bay community will be taking to the Weidner Center stage to attend the Girl Scouts of the Northern Great Lakes’ Courage Confidence and Character event on Tuesday, April 17 at 6 p.m. The event will provide a dialogue on how Girl Scouts is tackling the gender gap in America’s STEM workforce and inspire audience members to overcome challenges, solve problems and advance in their fields. Tickets for the event cost $25 and include one complimentary ticket for a daughter, mentee, colleague or friend. They can be bought online. Everyone of all ages and genders are welcome, including non-Girl Scouts. Doors open at 5:45 p.m. Informal networking with STEM leaders and activities will begin at 6:00 p.m., followed by the program and speaker discussion at 6:30 p.m. For more information, contact Chiara Boss at 920-955-3343 or cboss@gsnwgl.org.