Four candidates will be on campus this week and next to interview for the position of dean of the Austin E. Cofrin School of Business. Campus members are invited and encouraged to attend the open forums, all of which will be held in the Christie Theatre, University Union, Green Bay Campus. Below is the schedule for open forums for each candidate.

Two candidates will be on campus next week to interview for the position of Dean of the Austin E. Cofrin School of Business. Campus members are invited and encouraged to attend. Locations for interviews are now confirmed:

During an hour-long speech in front of more than 2,000 people at the Kress Events Center on the UW-Green Bay campus Friday night (April 1, 2016), U.S. Senator and presidential hopeful Bernie Sanders told his supporters to stay energetic and engaged. See the photos from the event. During an hour-long speech in front of more than 2,000 people at the Kress Events Center on the UW-Green Bay campus Friday night (April 1, 2016), U.S. Senator and presidential hopeful Bernie Sanders told his supporters to stay energetic and engaged. See the photos from the event.  Click to advance slideshow or view the album on Flickr. 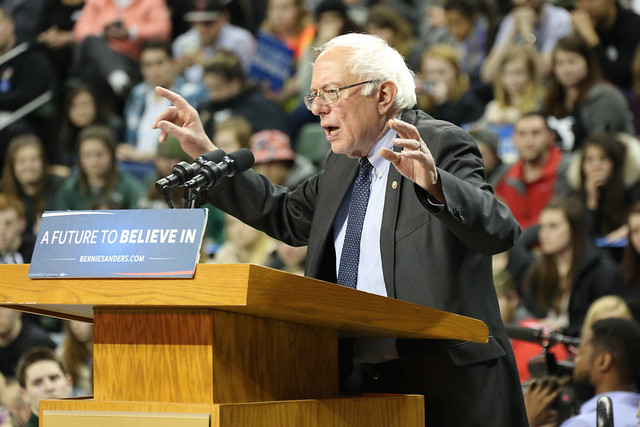 The staff of the Cofrin Library invites any and all who are interested to a round of candidate presentations as they search for two Research and Instruction Librarians. Candidates will present a mock information literacy session in room CL304. Candidates and their 45-minute sessions are scheduled as follows:

Monday, Aug 31, is the priority deadline for applications to become the University’s Vice Chancellor for University Advancement, which carries dual appointment as President of the UW-Green Bay Foundation, Inc. The search and screen committee is co-chaired by Sheryl Van Gruensven, interim vice chancellor for business and finance, and Tim Weyenberg, the Cofrin School of Business executive in residence. The committee is seeking candidates to succeed Jeanne Stangel, who left the University in July. For the full posting, see HR online.

Flanked by campaign staff, Burke arrived on campus around 11 a.m. and shook a few hands before a brief meeting with members of the local news media in the Gathering Room of MAC Hall. Burke made no statement but went directly to answering questions from the press, which ranged from the latest Marquette Law School Poll (due out just as she was leaving campus) to recent allegations she was fired from Trek Bicycle (“baseless”) to campaign funding and the importance of higher education in the state.

“Our university system is at the heart of Wisconsin’s future,” Burke told a half-dozen reporters who were on hand.

After the 5-minute media Q and A, Burke took a brief campus tour led by Assistant Prof. Alison Staudinger, Democracy and Justice Studies, along with Student Government Association leaders and others. She stopped in the SGA offices to greet students there, and posed for selfies and other photos with students outside the University Union as she prepared to depart.

Burke’s visit was the latest in a series of Northeastern Wisconsin campaign stops for the candidate and her opponent, Gov. Scott Walker (who was last on campus Sept. 9). The region is widely considered to be politically important due to its reputation as a critical swing area.

“Every voter is important in this race,” Burke told media as the visit began. “It’s going to be tight.”

Two candidates for the position of Interim Provost at UW-Green Bay will be available to meet interested members of the university community at a joint, open reception from 1 to 2 p.m. Thursday (Oct. 23) in the 1965 Room of the University Union. The candidates are Stephen Edward Fritz and John H. Richert. A news item with more information on the two, along with links to their resumes, is archived on the UW-Green Bay news site.