What a weekend! A special 50th Anniversary Alumni Days gave UW-Green Bay alumni and friends a chance to reunite with the campus community October 16 and 17. Among the highlights: about 70 alumni joining the UWGB Music students and faculty in concert, excitement at the Kress with the Green Bay athletics teams, mini-Bayfest in Phoenix Park, alumni musicians, affinity groups, a Habitat for Humanity reunion and build, resurrection of the BlueWhale Coffeehouse and so much more. See some of the best images here and thank you to alumni Dan Moore, Jena Richter, Sue Bodilly and adopted alumnus Kimberly Vlies for the fantastic photos! 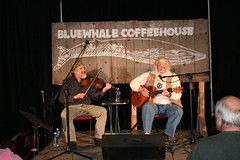 Friday, Oct. 16, is an extra special Phoenix Friday, with the start of Alumni Days 50th Anniversary Edition. The Phoenix Bookstore will remain open until 6 p.m. with a 20 percent discount storewide (excluding textbooks and gift cards). Aviand’s is offering 10 percent off at the Garden Café for showing your Phoenix spirit/apparel. Playing at Cheapseats this Friday is the children’s comedy “Minions.” Theatre and Dance presents “Theophilus North,” and there’s the BlueWhale Reunion, and more.

UW-Green Bay hosts its third annual Alumni Days on Oct. 16 and 17 with a bigger and better array of activities to coincide with the University’s 50th Anniversary celebration. Among the events on Friday’s opening evening is a resurrection of the BlueWhale Coffeehouse — at one time a premiere Midwest destination for blues performers — with a Shorewood Clubhouse concert by alumni favorite Claudia Schmidt. On Saturday, Phoenix Fest — a “mini-Bayfest” — will offer live music, food, beverages, and many attractions for the entire family including Segway tours of campus, carnival games, zip line, stunt jump, a chili bar, corn tent and beer garden. Green Bay Athletics teams will host Phoenix Phrenzy in a “midnight mania” type of atmosphere with player intros, dunk contest, a scrimmage and special appearance by the Chicago Boyz Acrobatic Team (featured on “America’s Got Talent”). Throw in Alumni Awards Night, a mainstage Theatre production, a Music concert with alumni choral participation, home soccer and volleyball, the return of the John Maino Golf Classic at Shorewood, Big Mouth, Pat McCurdy, vintage memorabilia displays and a 5K fun run, and it’s an action-packed weekend. See the news release, or the full schedule.

If ever a joyous reunion can be
Let us share what we’ve gained and lost in between
We’ll find that the years, both kindly and cruel
Have failed to put distance between you and me
-Claudia Schmidt

And a joyous reunion it will be on Friday, October 16, 2015, when the friends of the former BlueWhale Coffeehouse gather at the Shorewood Golf Course Clubhouse for the return of Claudia Schmidt, Mark Dvorak, Skip Jones and Randal Harris. The event is in celebration of both Alumni Days and UW-Green Bay’s 50th anniversary celebration.

While the reunion cannot take place in the original Shorewood Club building that housed the BlueWhale Coffeehouse (it was torn down years ago), the concert will take place nearby in what was formerly the Shorewood Annex, directly across the sidewalk from where the former Shorewood Club stood.

And while there won’t be the knotty pine paneling, large stone fireplace, well-worn couches or frost-covered windows that gave the coffeehouse its unique ambiance, the original BlueWhale sign (painted by Mike Tincher and Teresa Bargielski in the late 1970’s) will grace the stage. It was rescued from a dumpster after the Club was torn down, and has been hanging in a barn in Bowler, Wis. for the last 35 years.

The showcase artist of the evening will be Schmidt, one of the premiere performers from the BlueWhale days, now an international performer known for her lively folk, jazz and blues and playful humor.

Schmidt, a student at UWGB for a time, played her 12-string guitar and dulcimer to standing-room-only crowds for many years, and went on to a remarkable career traveling the world as a folk singer and spoken word performer. The master of ceremonies for the evening will be folk singer Jones, a UWGB alumnus and BlueWhale regular. He will be joined by Harrison, a remarkable jazz violinist from Madison and Dvorak, a member of the faculty at the Old Town School of Folk Music in Chicago and popular guitar and banjo player who has toured throughout the Midwest and East Coast.

Many alumni have fond memories of Saturday evenings at the BlueWhale — in the 70s and early 80s considered one of the premiere folk music venues in the upper Midwest. Artists from all over the country would come through on tour, playing at Café Extempore in Minneapolis, then at the BlueWhale in Green Bay, and then on to venues in Madison or Chicago.

Some of those acts became folk music icons (Utah Phillips, Bill Staines, Gordon Bok and John McCutcheon all played at the Whale) and many others achieved regional and national acclaim (Greg Brown, Paul Cebar and Jones, among them).

It wasn’t just the music that drew students and community members to the BlueWhale, however. There was something magical about the place in its heyday — the music, the fireplace and the fellowship all flowed together to create a warm and friendly gathering place for a particular crowd of people who shared some common values and interests — the environment, folk music, art and social justice.

As that crowd reunites on Friday October 16, perhaps a few pounds heavier and with a little more gray, maybe a little of that magic can be recreated.

Doors open at 6:15 p.m. for socializing and reminiscing. The public is asked to bring memorabilia from the BlueWhale days (posters, programs, handbills, photos, etc) to share, and perhaps contribute to the UWGB archives. The concert begins at 7:00 p.m. Price of admission is $15 (cash or check only—no credit cards), or free to those purchasing an Alumni Days admissions bracelet (entrance for two for $25) for all Alumni Days activities.