It’s that time of year, again… when the talk of ghosts, goblins, spiders and things, make a person go “Ew!” At the University of Wisconsin-Green Bay, there’s a new “Casper” in town. Not the friendly-ghost-type. But to arachnophobes, it’s still scary. Very scary.

UW-Green Bay’s Cofrin Center for Biodiversity recently announced the donation of the Kaspar Collection to its Richter Museum of Natural History. It is the largest spider collection in the state of Wisconsin. When just the thought of a spider collection raises the hair on about 30 percent of the world’s population, said to be terrified of the eight-legged arthropods, serious scientists delight in the opportunity to study, research and preserve such a rich collection.

Prof. John “Jack” Kaspar, Ph.D. was an arachnologist and biology professor at UW-Oshkosh for more than 30 years, amassed a collection of 10,000 spider specimens during his career, mainly from Wisconsin and the Midwest, but also from Mexico, Canada, Europe, Africa, South America, and East Asia. Kaspar donated specimens to the Richter Museum from 2014 until his passing in December of 2015, at age 88. His wife Cathy has continued the donation, adding more specimens, journal articles, books, reports, and other notes.

Kaspar chose the Richter Museum for the donation because of a longtime friendship with Richter Museum Curator, Tom Erdman, and the expertise of UW-Green Bay’s own “Spider Man” arachnologist Prof. Michael Draney (Natural and Applied Sciences), who works with the collection.

“The Kaspar Spider Collection is an important scientific resource that will become more valuable over time,” said Prof. Draney. “Very few other spider collections exist from Wisconsin from the 20th century, and so the collection represents important ‘baseline” data that we can use to compare with newer samples we take.”

Draney says Kaspar’s generous donation allows UW-Green Bay to better understand the importance of these animals to the ecology and biodiversity in the region. For example, it can be estimated when certain species arrived in Wisconsin by looking at when they appeared in the Kaspar Collection. One non-native species of cellar spiders (Pholcus) did not appear in the Kaspar Collection until the late 1980s. This species is now very common in the Green Bay area.

The spiders in the collection range in size and are stored in an assortment of glass jars and vials. Unlike butterflies that can be pinned, spiders must be kept in an alcoholic solution to prevent them from drying out. The collection is stored in metal cabinets to aid in long term preservation.

Approximately 8,000 spiders collected by Kaspar were analyzed and identified by him. The remaining 2,000 have yet to be worked with, giving Prof. Draney and his students a rewarding, hands-on opportunity.

The Richter Museum of Natural History contains one of Wisconsin’s most significant collections of animal specimens for scientific research and education. Access to this scientific collection is available to researchers, UW-Green Bay students and faculty and, by appointment, to the public. The museum also serves as a repository for specimens obtained by biologists, resource managers and graduate students involved in field research and environmental impact reports. The recent addition of the Kaspar Collection greatly enhances the prestige and resourcefulness of the museum, which also hosts one of the nation’s largest egg (Oological) collections, and will be appreciated by students, faculty and researchers for years to come.

He’s known as “spider man.” UW-Green Bay Prof. Michael Draney (Natural and Applied Sciences) is an expert in the field of arachnology. He believes several of his students recently found a new spider species on the shores of  Green Bay. Upon further inspection of the Kaspar Collection, Prof. Draney discovered that Kaspar had found the same species in 1975 near the Wolf River. Draney originally suspected that the species was a non-native moved into the Bay of Green Bay recently with ship traffic, but finding this species many miles away and 30 years before is evidence that the species may indeed be native to Wisconsin.

Prof. Draney is currently working with a Russian colleague to complete further analysis of the spider. They need to confirm the spider has not been identified elsewhere.

There are currently at least 500 spider species in Wisconsin, most of which are native. Although it is not uncommon to find a spider species in Wisconsin that has never been seen in our state before, it is quite rare to find one that is undescribed, or completely new to science.  This hasn’t happened in many decades, making this Green Bay find significant for UW-Green Bay’s Natural and Applied Sciences team, according to Draney. He says it is especially rare to find a new species “that is not tiny.” “The new species we found is about 1 cm in body length, which is above the mean size for spiders,” he says. 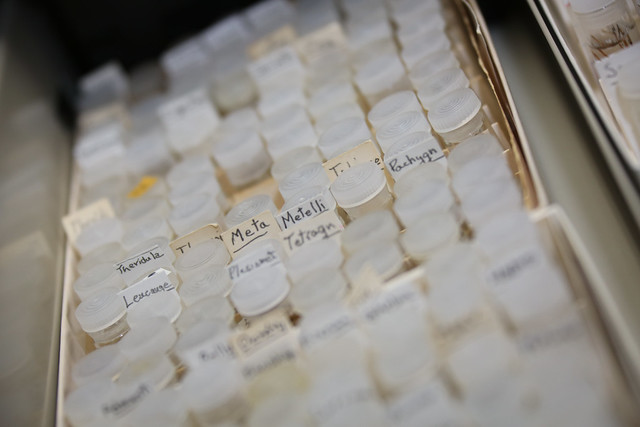