A new fire pit was designed to serve the University and have an artistic component as well. Students from the Art and Design Program took the lead on the project.

“I’m really proud of the students,” said Professor of Art and Design Ellen Rosewall. “They planned the project, worked through campus ‘red tape,’ and raised more than $8,000 from various campus sources to support the project.”

A christening ceremony was held on Oct. 18. Students participated by “symbolically sending their dreams out into the universe by writing them on slips of paper which was used as kindling to start the fire.” S’mores and hot chocolate was provided.

The class collaboratively decided to create something that would allow them to build valuable skills and make a lasting impact.

“Not only did I learn all the logistics involved in a large scale project such as this, I also learned how to work efficiently within a group,” said UWGB student Erin Pagenhopf. The fire pit will benefit the campus “by providing a space for diverse groups to meet while also creating a strong sense of community.”

The design of the fire pit serves a symbolic reminder of campus unity according to student Leslie Trochil.

“The fire pit was designed so that the Phoenix’s wings would curve together and ‘hold’ the fire ring,” said Trochil. The fire ring surrounds the pit itself and consists of three flames made from orange-colored concrete. The words, “We Rise from the Ashes” also frame the pit, embracing everything the Phoenix represents.

To Trochil, the design also has a personal meaning. “In my mind, the Phoenix holding the fire ring is a symbol of how we attempted to solve a problem on campus through art.”

Former Dean of Students Brenda Amenson-Hill and the Phoenix Park Committee, were essential to construction of the new addition.

A fire permit from Public Safety is required prior to use of the fire pit. More information about rules and regulations can be found here, Campus Fire Pit Policy. 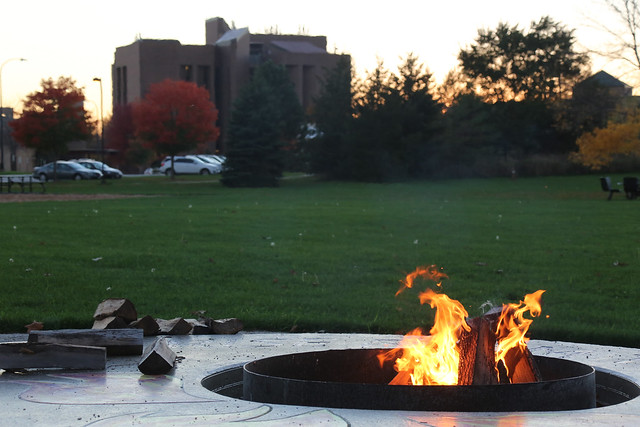