Congratulations to Rupert and Mimi, the Peregrine parents of four fuzzy eyasses (baby falcons) hatched recently on the UW-Green Bay campus. According to Tom Erdman, Director of the Richter Museum at the Cofrin Center for Biodiversity, it is the first successful nesting since the Peregrines first attempt in 2011, when “a fight with another Peregrine (interloper) resulted in eggs being lost that year.”

Peregrine falcons are native to Wisconsin but had vanished by the 1960s due to habitat loss and extremely low production of young. Pesticides such as DDT thinned the eggs of the raptors, causing them to fail.

It’s been a long, but now successful flight for the UW-Green Bay falcons. They first tried to nest on the Cofrin library roof, but since the roof space is rented to private companies it was deemed “dangerous” for the birds and people to be paired together. The following year, the nesting box was moved to Theatre Hall but ignored by the falcons. An attempt back to the Cofrin Library last year was nearly successful…

“We had Mimi plus an unbanded male,” Erdman explained. “Mimi laid eggs on a narrow ledge at the top edge of the vent shaft. Those eventually were accidentally knocked off and shattered below. We were able to retrieve one remaining egg which we placed in new trays. Mimi never returned to it…”

“Mimi started out with an unmarked male again who was present through most of the winter,” Erdman said. “Then he was replaced by Rupert in mid-April when the males were chasing each other around. Rupert was the champion (although he may not have any DNA in this set of young!) and is now being a very good food supplier to young and Mimi. So, it looks like the seventh year of attempting to nest here has finally been successful. I know (passionate birders) (Founding Chancellor) Ed Weidner and Dave Cofrin (Cofrin Library namesake) would both be very pleased!”

On May 27, 2017 a Peregrine falcon banding team assembled at UW-Green Bay to tag and document the four newly-hatched young of the Peregrine falcons nesting in the alcoves of the Cofrin Library. The team of avian experts included Erdman, UW-Green Bay Richter Museum of Natural History, climber Eddie Feltes, Greg Septon of Wisconsin Falconwatch and Green Bay Bird Club president Nancy Nabak. Nabak documented the event in photos from inside the window well staircase. 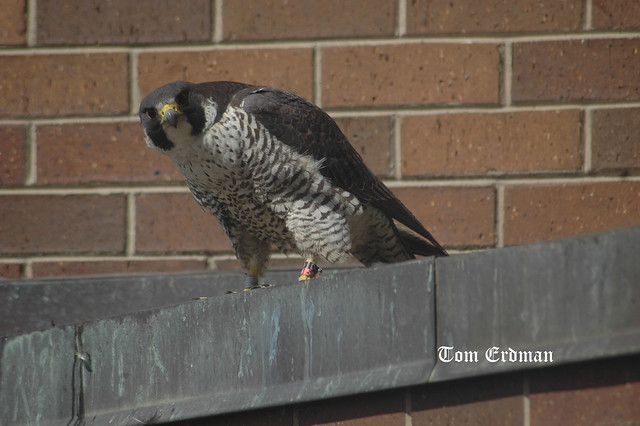