The UW-Green Bay Holiday Parade Committee won the Mayor’s Award for best float originality in the 2015 Green Bay Holiday Parade, but the real winners were local children who benefited from the campus donations of school supplies collected by the committee. UW-Green Bay’s committee themed its float “Every time a bell rings, a Phoenix gets its wings.” The theme of the parade was “Sounds of the Season.” The committee ties the annual event into a service opportunity for campus. This year’s beneficiary from campus members and local businesses were Phuture Phoenix partners Jefferson Elementary of Green Bay and Abrams Elementary, Oconto Falls.  The gallery features members of the committee that were able to sneak away to deliver the supplies to Jefferson with Phuture Phoenix staff Mary Sue Lavin and Zachary Taylor. Also pictured is Jefferson Principal Marchelle Moten, and committee members showing off a bulletin board featuring UWGB and the Phuture Phoenix program at the school entrance. The committee members express their appreciation to all who donated! 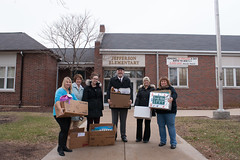