University of Wisconsin-Green Bay games studies students raised nearly $800 for the Children’s Hospital of Wisconsin in a creative initiative they termed “UWGB Jingle Brawl 2015.” Throughout the day, students hosted various video game tournaments, held a raffle, demonstrated tabletop games, monitored community play-throughs, and gave away prizes. Admission was free and the event was held in the University Union, UWGB.

“Far and away the most popular game was Super Smash Bros. Wii U,” said UWGB Communication Prof. Bryan Carr. “It drew a lot of competitors and spectators (more than any other tournament); we also had a group of students set up an older version of the game to play too. The Guitar Hero Live station was busy all day and we also got a lot of mileage out of Mario Kart 8 and Just Dance (we even had professors dancing to the game live online). Also popular was the 8-bit Nintendo Entertainment System setup — someone was constantly playing Mario or Mega Man. And of course, Green Bay being a football town, we got a few Madden players too.”

Carr said there was steady traffic all day — both UWGB students and families who were on campus for ‘Tis the Season or other events. There was a request for more events of its type in the future.

Students were excited and engaged in the project from the start, Carr remarked, and really looked forward to using video games in a positive way to serve the community.

The public can continue to help the students with this cause. Donations are open until the end of the year here. 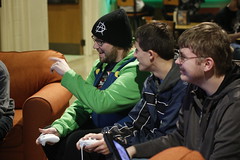