For the third straight year UW-Green Bay won one of the three awards given for non-commercial floats at the 2016 Green Bay Holiday Parade. This year, UW-Green Bay won the Grand Marshal’s Award for most original. Every unit was asked to portray the parade theme, “Winter Wonderland.” UW-Green Bay’s parade committee used liberal interpretation of the theme for its float — “Gone away is the bluebird, here to stay is the new bird (Phlash Phoenix, of course). ” The committee used a few lunch hours to build Phlash a home nest, situated in the middle of the Cofrin Arboretum among many of his handmade hardy winter birds (none of them blue). The UW-Green Bay spirit squads and about 50 student-athletes joined the parade this year. A student organization — UWGB Hip Hop — preceded the University float. Liberty Mutual Insurance, the Chancellor’s Office and the UWGB Alumni Association were float sponsors. 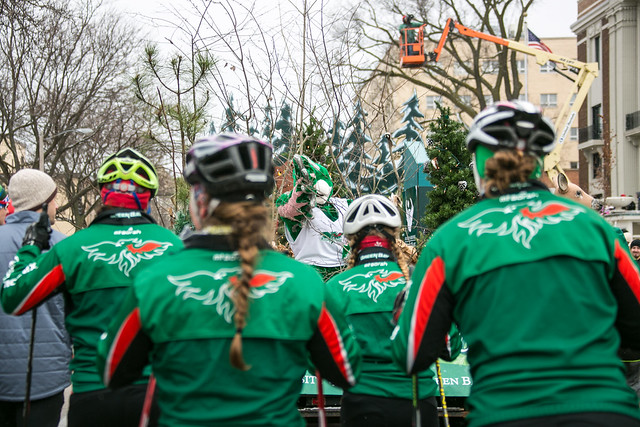