With a ceremonial rolling of new turf, Monday, Nov. 13, 2017, UW-Green Bay students, University leadership, fans, donors and community members could begin to envision what the new Kress Family Outdoor Recreation Complex would look like. It is slated for completion in spring of 2018. The ceremony opened with remarks by UW-Green Bay Chancellor Gary L. Miller, Director of Athletics Charles Guthrie and Vice Chancellor for Student Affairs and Campus Climate Eric E. Arneson. Team captains and Student Government Association leaders joined with Hall of Fame  Coach Aldo Santaga (the namesake of the current stadium) in rolling out ceremonial turf for the soccer field.

The $4.9 million complex is well on its way to completion thanks to student fees and private donors. Planning for the new soccer and softball stadium started in 2009. Ground was broken earlier this year.

The stadium, located directly behind the Kress Events Center, will have a grandstand, all-weather turf, upgraded technology and a new lighting system for both soccer and softball. The new fields will be NCAA compliant, which means they can host championship games. (Just last week, men’s soccer had to play their game in Chicago, despite winnin gthe conference regular season). It will be shared with the highly active UW-Green Bay student body for intramurals and recreation, and also will be available for community programming. 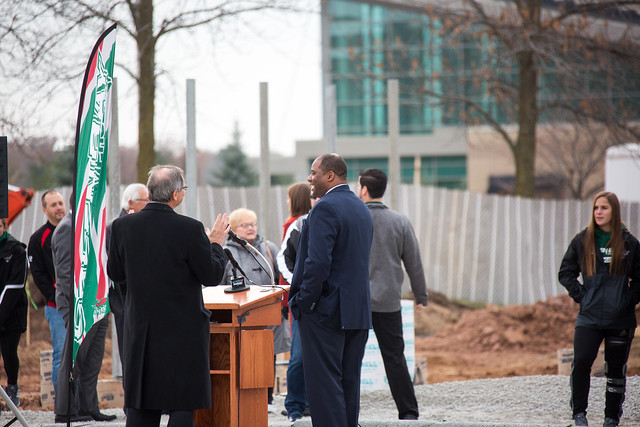