A retired professor and his wife have stepped forward to promote revitalization of the tallgrass prairie on the campus of the University of Wisconsin-Green Bay.

Keith L. and Betty A. White of Green Bay agreed earlier this fall to make a generous, five-figure gift to the University to create a permanent endowment for improvements to the prairie, a signature feature of the Cofrin Memorial Arboretum encircling campus.

(The Whites, in blue and purple parkas above, posed with staff, faculty and friends who toured the site and discussed plans for the endowment with them in mid-October.)

The amount of the gift was not revealed publically, but the principal is expected to spin off up to several thousand dollars annually for student research, projects and plantings aimed at maximizing diversity and bringing the prairie to full flower.

“What we’re looking for is that, 20 years from now, there will be many more patches of color and much more diversity, especially in the ‘understory,’” Keith White said while walking the 8.5-acre site. “Right now, we have perhaps 50 (plant) species present here. I’d like to see 200.”

White joined the then-new UWGB in 1968 as a founding member of the biology and ecology faculty. He made the first prairie plantings on the bayshore campus in 1973, in an area of former farm fields along South Circle Drive. Five years after he retired in 1989, the University named and dedicated the Keith White Prairie in his honor.

In the decades since, the prairie has come to be dominated by the success of climax species including big bluestem and switchgrass, along with invasive goldenrod, whose taller stature and deep roots crowd out other plants.

The relative lack of diversity today limits both the attractiveness of flowering-plant displays for casual visitors and the range of species available to researchers studying succession and other ecological issues.

In a thriving prairie, flowering forbs become evident throughout the growing season, a pattern often called “sequential blooming.” Some of the flower species evident at the UW-Green Bay prairie include yellow cone flower, prairie dock, lupine, black-eyed Susan, spiderwort, and false indigo, but White reiterates there should be more.

“I hear from friends of mine, people who make the drive here because they want to experience a native prairie, and they tell me, ‘I didn’t realize so much of it would be grasses,’” White relates. “We need to change that. That’s my primary goal.”

In lieu of bison

Faculty and staff of the University’s Cofrin Center for Biodiversity manage the prairie with periodic spring burns to mimic the natural wildfires that, on America’s pre-settlement grasslands, revitalized the native plant communities and discouraged invaders.

Both White and Prof. Bob Howe, who directs the biodiversity center, are in agreement, however, that another natural contributor to prairie ecology is unavailable here.

“We have never had bison and elk roaming free on this prairie,” Howe said, “and I’m not going out on a limb here by saying we never will.”

Those keystone species were vital to the biologic diversity of America’s native prairies because their grazing habits, massive size and sharp hooves periodically disturbed the grasslands and encouraged understory plants to gain a toehold. Bison, in particular, had a habit of digging out depressions to wallow in the dust, their shaggy coats picking up seeds and depositing them elsewhere as their herds traveled the land.

At a little under 10 acres in size, bordering the boundary road for the busy central campus and criss-crossed by hiking and biking trails, UWGB’s Keith White Prairie is not a prime candidate for a large-ungulate transplant. That leaves it to humans — using tools, seeds and plans developed via the White’s recent gift — to promote biodiversity.

Plans to use the White endowment

Howe says that the first step will be a comprehensive inventory of the existing prairie documenting species diversity and relative abundance, with an assessment of non-native invasives and soil conditions.

Over a period of years, the White endowment would encourage researchers to move forward with individual projects that would likely begin with rototilling and manually clearing small pockets within the exiting prairie, replanting with diverse species, and continue with monitoring of the new plants’ success.

Partnering with UW-Green Bay on the project is alumnus Neil Diboll, a former student of Keith White, who during his undergraduate days in the 1970s assisted in developing and expanding the campus prairie. Diboll is today known nationally for his expertise in prairie planting and restoration through the success of the company he founded, Prairie Nursery Inc., based in Westfield.

Students who receive grants from the White Prairie Restoration Endowed Award Fund will be expected to pursue their projects under the supervision of the Cofrin Center for Biodiversity, in consultation with Diboll, as they conduct plantings, transplants or other measures to increase the diversity of native plants, insect pollinators and animals. They’ll also be required to maintain careful records and maps of activities to facilitate long-term monitoring.

“The gift from Keith and Betty will provide tremendous opportunities for our students,” Howe says. “It is very appropriate that, during this University’s 50th Anniversary year, they have committed their support to the Arboretum, this prairie and our students.” 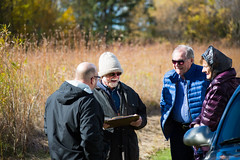