Not only are they smart, passionate and forward-thinking, but the recipients of the 2016 University of Wisconsin-Green Bay distinguished and outstanding recent alumni awards are incredibly grateful for their UW-Green Bay experience and humbled by the honor.

The annual Alumni Awards were held October 4 on the stage of the Weidner Center stage for the Performing Arts on the UW-Green Bay campus. Surrounded by family, co-workers and lifelong friends, they shared the stories — some fun and some emotional — of their journeys to, and since attending, UW-Green Bay.

The outstanding recent alumni, Ben Kvalo ’10 and Theresa Okokon ’05 travelled the greatest distances, California and Massachusetts, respectively. Kvalo came to UW-Green Bay, he said, to follow his own path and to experience opportunities he didn’t think he would find at a larger institution. What he found, were faculty members (he named former UWGB Prof. Lucy Arendt, specifically) that impressed upon him how important it was to envision his dream and see himself there.

“My goal in college was to be General Manager of the Green Bay Packers someday, but I’ve readjusted my path, just a bit, since,” the business administration major joked. Kvalo is now the global project manager for 2K, a video game development and publishing company, within Take-Two Interactive, that manages brands such as, BioShock, Borderlands, Mafia, NBA 2K, Sid Meier’s Civilization and others.

“Being a tour guide helped me to step outside my comfort zone and improve my communication and presentation skills. I learned that I should set my goals high, and that I am not going to be defined by my failures, but I will allow them to shape and motivate me.” He says he advised students in the same manner he was advised… “Follow your passion and be willing to risk everything to find what drives you.”

Theresa Okokon is the founder and instructor of LEGIT.yoga (Learn, Emote, Grow, Ignite, Transform), providing trauma-informed yoga for homeless, low-income and at-risk populations in the Boston area. She was recently honored with the Kip Tiernan Social Justice Fellowship Award for her organization.

“Someone asked me today how I came up with the idea to teach trauma informed yoga in homeless shelters,” she said, “and perhaps the root of that is twofold…

“First, I come from a mother whose strength is incomparable,” she said. “When you are raised by a woman like my mother, you begin to believe that absolutely anything is possible. Second, I went to UW-Green Bay. I came to UWGB because of an immature decision to just go to school where my boyfriend was in school. It turned out to be one of the best decisions I ever made. As a social work major, I got to study with professors like Loretta Larkey, Judy Martin, Candy Conard and Anne Kok. I was challenged by an internship at Brown County Human Services. I was supported by the team at the AIC, and learned how to engaged in things that mattered to me with the BSU, FMLA, SAGA, SGA, SUFAC and the Social Work Club. The opportunities for international studies here at UWGB made it such that I ended up living in Ecuador for two years after having the thought, ‘hey, maybe I should join the Peace Corps.’  The interdisciplinary approach at this University created the kind of mind that would be in a training about treatment for PTSD (post traumatic stress disorder), and think ‘hey, this sounds like a yoga class.’”

“I know I wouldn’t be me, if it wasn’t for you (UWGB),” Okokon said. “I realized that UWGB was the place I was meant to be.”

Fralick said he was convinced by a couple of teachers to “be more” and they requested that he explore UWGB.

“I was instantly hooked. Somehow I felt more connected, more included here than the other campuses. In fact, the first week of my first year here, some kids set up a waterslide made out of a slip-n-slide. A girl came up to to me as I walked back to the “Bay Apts” and said, ‘You want to try our waterslide?’ It was really cold, really fun and made me feel part of this place in an odd way. Note to my sons. When you go away to college and a cute girl comes up to ask you if you want to try their waterslide — the answer is always ‘Why yes, yes I do.’”

Fralick said he learned about excellence from his roommates— all music and theatre majors — Carl Allen who went on to become a famous drummer, Mike Dubois who went on to dance at Juilliard and Erik Andersen became a great teacher. “They, along with Scott Stewart… showed me that excellence doesn’t just suddenly happen on the stage — it happens because of preparation — in the practice room, the dance floor and the practice field. Preparation has a look to it… it looks like hard work.”

Likewise, Fralick says he was pushed by the UWGB faculty.

“I had a lot of great teachers here but the two that challenged me most were Professors Bill Shay and Bill Conley. Professor Shay was very exact in the way he taught, and very demanding. Then there was professor Conley. Hiding inside the noggin of this mild mannered operations research professor were crazy algorithms for solving problems impossible to solve. These programs were so hard on the system when we ran them — this was back in the day of the mainframe — that we were only allowed to run them at night and on weekends. So, these professors prepared me to be a fearless developer. That, along with my business studies prepared me to co-found SAI (Software Architects Inc.).”

“But, without everything that I learned here, the challenges placed upon me by a couple of brilliant professors — none of this happens,” he said. “The software that has shipped a trillion dollars of shipments and employees hundreds of IT staffs and helps protect American jobs – would never have happened. Talk about a great return on several thousand dollars in Pell grants so a kid with nothing could go to a great affordable university… For me, a large part of the person I am, is due to this University. So, what I feel is profound gratitude and just leave you with something I’ve discovered… Gratitude is a cyclical formula. A person who leads with gratitude becomes the person for whom others have gratitude.  Make gratitude a big part of your life and you will find it just makes you happier.”

Four years out of high school, Glen Tilot was searching for direction when a near life-threatening accident provided some navigation. After months of therapy and vocational rehab benefits in hand, he enrolled at UWGB. Tilot said he was uncertain of a major until taking Prof. Richard Hansen’s Human Relations Skills class. “It changed my life,” Tilot says.

Tilot majored in social work and has been with the Brown County for 32 years. A familiar face around campus, Tilot says he has had the privilege of working with hundreds of UWGB Social Work and Human Development interns and volunteers through the years. The campus has also delivered some of his best father/daughter moments — particularly sharing Phoenix women’s basketball with his now grown daughters since they were little.

“The social work profession is one that doesn’t have many awards,’ he says, “so tonight I accept this award to also honor all of those social workers who have preceded me and those in the field now that are working in the community with people who are hurting and need someone to advocate for them and the professors like Richard Jansen who inspire us to do this work!”

Dan Young is a CPA and the managing partner of Schenck SC (accounting and tax preparation), Green Bay. He and his friend Mark Schleitwiler first attended UW-Fox Valley and decided to transfer as juniors (in 1978). He said he heard good things about UWGB and met with (faculty members) Karl Zehms and Curtis Graham. In the initial meeting, “Karl was fashionably dressed in his favorite leisure suit and we could barely make out Curtis across the desk with smoke billowing from his big fat cigar…”

The friends decided to enroll at UWGB, and by mid-semester were acing the pop quizzes and feeling pretty confident… until they took Zehms’ midterm.

“It was about one-third of way through a three-hour test when I knew it wasn’t going well,” Young says. “You know that churning feeling in the pit in your stomach? I looked at Mark and he was running his fingers through his hair and his face was white as a ghost. We stepped out and went to vending machine just behind the test room to get caffeine hoping that would turn the tide. But the following Tuesday we had our test results and that churning in the pit of my stomach was confirmed — I had gotten a ‘D.’ Karl called both of us to his office and asked, ‘What happened? I thought you guys new that stuff…’”

I said, “Karl, those pop quizzes were like a slow pitch right down the middle of the plate. That’s what we were expecting on the mid-term. That mid-term was a high, inside fast ball and brushed us back on our fanny. Karl gave us three choices — audit, drop or stay. Apparently there wasn’t a fourth option I was hoping for — that he had mis-graded our test. We stayed, and retook the course the following year, and we received an A. We had handled Karl’s fastball.”

Eventually Young learned that Zehms gave actual old CPA exams to the students. “What better way to prepare us for the real world?” Young said. “I learned that No. 1, your toughest challenges prepare you the most, and that is why UWGB has one of the highest success rate for passing CPA exams in the nation. No. 2, don’t underestimate anything. Be prepared. It was a scary wake-up call and a life lesson I will always remember.

“When one’s ability, determination and effort to positively impact others, shine through his actions, it begins to build a legacy that can’t be measured by only personal success, but rather by how others have been inspired to take action. Just as Karl Zehms, Mike Shinners & Mike Hucovski (who gave him his first job 36 years ago), left a legacy; I hope to do the same.”

Matthew Vanden Avond ’01, President Elect of the UW-Green Bay Alumni Association and Steve Maricque ’78, current president, gave the welcome and served as host, respectively. Chancellor Miller greeted the guests, music was provided by Cheryl Murphy ’95 and alumna Barbi Gossens created this year’s awards that were given to the recipients. 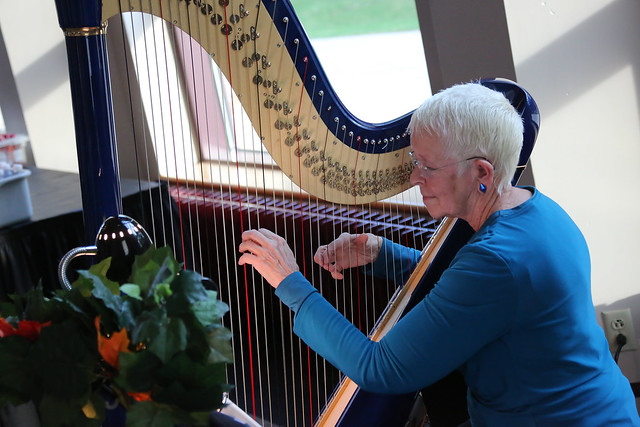