The tiny bird with a large “footprint” is in the news again, thanks to the work of the University of Wisconsin-Green Bay faculty, staff and former students, along with the Department of Natural Resources and the United States Fish & Wildlife Service.

Four pairs of the endangered Great Lakes piping plovers nested in Lower Green Bay this year and six fledgling chicks were identified just a year after a pair nested at the site for the first time in more than 75 years.

Local biologists who monitor the site were surprised at the increase in nesting, according to a press release by the U.S. Fish and Wildlife Service.

“Plover activity at the site this year exceeded our expectations,” said Bowman. “With at least a dozen adult plovers spotted at Cat Islands, this has clearly become an important area for the recovery of the Great Lakes piping plover.”

The plovers are successful thanks to the ongoing partnership among the Service, Wisconsin DNR, Brown County Port, the U.S. Army Corps of Engineers and others, to create and manage habitat within the Cat Island Chain, once ravaged by high water and erosion. See the previously published story about the graduate work of Prestby and Tim Flood on the Cat Island Chain. Reconstruction of the 272-acre chain in Lower Green Bay in 2012 and will continue over the next two to three decades with clean dredge material from the maintenance of the Green Bay Harbor. Two other UW-Green Bay luminaries, Professor Emeritus Bud Harris and UW Sea Grant Biologist Vicky Harris ’98 (Environmental Science and Policy) were instrumental in planning and development of the Cat Island restoration project.

According to the U.S. Fish and Wildlife press release, Green Bay has regularly been an important migratory stopover site for the endangered piping plover, and with the ongoing reconstruction of the Cat Island Chain, the area is now able to support nesting piping plovers. Apostle Islands National Lakeshore is currently the only other regular nesting location in Wisconsin for the small shorebird.

Since being listed as endangered, conservationists have worked tirelessly to save this rare bird from extinction by preserving and restoring habitat, protecting nesting areas and monitoring the birds’ migrations.

In late June, the Cat Island chicks were banded with leg bands in specific color combinations that help identify and track the birds. Current UW-Green Bay students Vanessa Brotske, Maria Otto, Colton Tanner and Emily Weber, along with Cofrin Center for Biodiversity Ecologist Bobbie Webster and DNR wildlife technician Roberta Reif ’16 (Environmental Sciences), participated in the banding effort. The adults migrated in late July, and juveniles departed in early August. Many Great Lakes piping plovers have already been spotted on their wintering grounds in Florida, Georgia and other Gulf and Atlantic Coast states, joining plover populations from the Atlantic Coast and Great Plains. 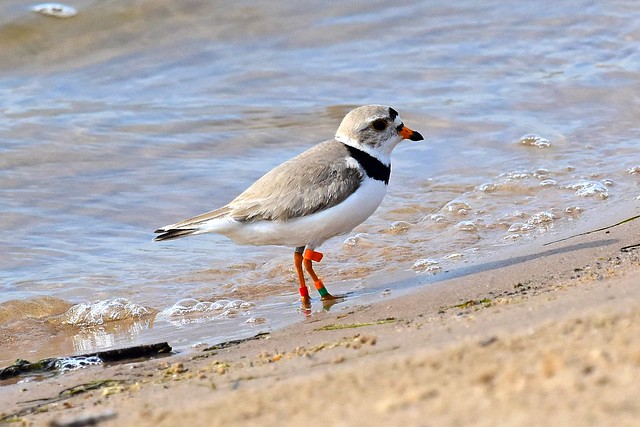 The Cat Island Chain is currently closed to the public. Limiting disturbance at the site is also critical for the success of both piping plover and other breeding migratory birds.

Anyone who spots a piping plover in Wisconsin can contact Reena Bowman at the Green Bay Field Office by e-mail at reena_bowman@fws.gov or the University of Minnesota Research Team at plover@umn.edu. For more information on piping plovers and how to help them, visit the U.S. Fish and Wildlife Service’s website at http://midwest.fws.gov/endangered/pipingplover.