UW-Green Bay is known for its applied research and hands-on opportunities. The Capstone in Environmental Science Class provides both. The class is creating scaled-down magmatic intrusions in the laboratory.

“Magmas (basically molten rock) are generated at depth in the Earth, and can be transported through the crust via magma-filled cracks (dikes),” Currier explains. “Magmatic dikes feed volcanoes, melt the crust, and concentrate economically important ore deposits. However, there are significant blind spots in our understanding of dikes. Currently, the effect of solidification on dike formation and behavior is poorly understood. We are trying to better understand the effect of solidification by studying analog experiments that realistically mimics dikes in nature.”

The experiments utilize porcine gelatin (representing the crust) and wax (representing magma). The wax is injected at the base of the gelatin using compressed air. The wax intrudes into the gelatin and ascends to the surface of the tank, erupting as a lava fountain. Once the wax has completely solidified, it can be extracted from the tank and investigated in exquisite detail, unlike any magmatic dike found in nature.

“By the end of the semester, we will have used 66 pounds of unflavored, porcine (from swine) gelatin. Making it is one of the more unpleasant smells out there (think hot, wet dog, or the interior of a dog food factory in the middle of summer).”

Currier says using gelatin as a crustal analog dates back to experiments in the 70s. But using a solidifying magma analog (wax) is somewhat novel.

“Although I did develop the specific experimental protocol, I was influenced by what is already out there in the scientific literature,” he says. 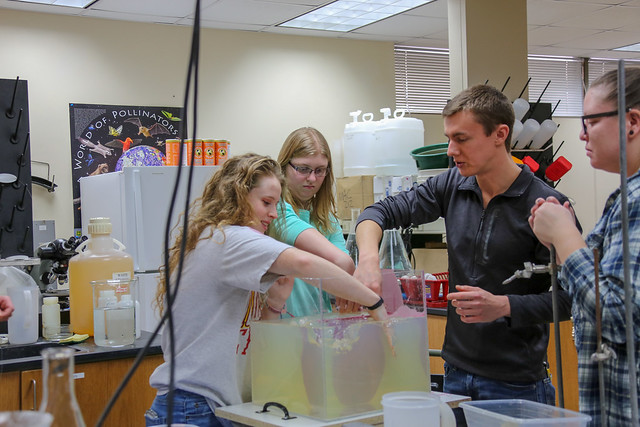