Looking forward to Jazz Fest 50 this Saturday, Jan. 25? Take a peek into the past through these photos capturing different Jazz Fests throughout the years, provided by the UW-Green Bay Archives and Area Research Center.

Jazz Fest, the second oldest jazz festival in Wisconsin, invites middle and high school jazz bands from across the state to celebrate the joy of jazz music! In addition to workshops and classes, these bands also participate in an afternoon concert on the last day of the event. This year’s concert is on Saturday, Jan. 25 at 4 p.m. in the Cofrin Family Hall at the Weidner Center for the Performing Arts; this concert is free, and the public is welcomed and encouraged to attend. This year’s high school band guests include Ashwaubenon High School, Green Bay East High School, Pulaski Middle School, Pulaski High School, Two Rivers High School, Evansville High School, Preble High School, West DePere High School, Bay Port High School and Jefferson High School. The Jazz Fest celebration will be capped off with a concert by The Dirty Dozen Brass Band and The Squirrel Nut Zippers at the Weidner Center on Saturday, Jan. 25 at 7:30 p.m. Tickets can be purchased here.

Read more about Jazz Fest and its history here, or contact Adam Gaines at 920-465-2440 or gainesa@uwgb.edu with any questions. 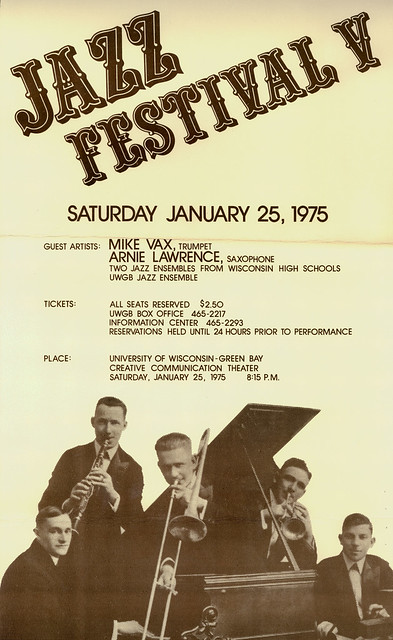 Jazz Fest is celebrating its 50th anniversary starting on Thursday, Jan. 23, 2020 on UW-Green Bay’s campus. Associate Prof. of Music Adam Gaines explains the history of Jazz Fest and what people can expect from this year’s lineup. Below is the list of events:

Editor’s note: In his role as UW-Green Bay photographer/videographer Dan Moore writes one blog post a year, always a reflection back on his favorite photos of the year. See his take on 2019…

As both the new year (definitely) and a new decade (depending on your stance in the “there-was-no-year-zero debate”) begin, here are 10 of my favorite photos from last year:

Lunar Eclipse Over the Cofrin Library This was right in my wheelhouse as a photographer. It was about zero degrees, which was neat, and the sky was clear, so all I had to figure out a way to frame things in an interesting way and be done before I lost feeling in my fingers. Krash the Kress is such a fun event, and this crew looked to be having the most fun of all. If you’ve ever met Joe, you already know that his enthusiasm for science demonstrations is unsurpassed. The challenge with this shot was getting an image where the spark was arcing. It took a lot of frames but I got one. I can count on getting interesting expressions from the actors in the Theater program, but this shot form the rehearsals for Julius Caesar is my favorite.

Phoenix Sculpture in the Fall Shortly after the Phoenix Rising sculpture was installed, I was walking from the Cofrin Library to Theatre Hall and noticed how the trees framed the sculpture, and thought, “That’s going to look pretty great with some fall colors.” It did.

Goat Yoga in the Quad The connections built during Camp Lloyd are truly amazing, and I think this photo captures the bond between the campers and the UW-Green Bay student buddies. As part of GB Welcome, freshmen participated in a community service project followed by at party inside the Lambeau Field Atrium. This year’s freshmen were serious about having a good time.

An early snowfall blanketed campus before all of the leaves had a chance to fall. I thought this maple was particularly stunning set against the whites of the sky, snow and science buildings. Many years ago, when I graduated from UW-Green Bay, I remember the feeling of looking around the Weidner Center for family and generally trying to soak in as much of the atmosphere as possible. It’s something you only get to do once, but I love seeing the looks on the faces of each semesters’ graduates and having a pretty good idea what they are feeling.

In recognition of world Human Rights Day on Tuesday, Dec. 10, 2019, the College of Arts, Humanities and Social Sciences hosted the inaugural Common CAHSS 2019: Human Rights event at the Weidner Center. This year marked the 71st anniversary of the Universal Declaration of Human Rights. Throughout the day, there was a total of 30 scheduled activities, capped off with keynote speaker Rais Bhuiyan, founder of the non-profit “World Without Hate.”

The day began with welcoming remarks to kick things off and quickly moved into various presentations by faculty, staff and students. Some presentations included “With Murderous Intent: The Right to Violence in Ancient Greece” presented by Michael Holstead, “Contemporary Artists as Activists” presented by Sam Watson’s Contemporary Art 203 class, and “‘Living Deliberately:’ Discovering and Exceeding Thoreau” presented by Prof. Rebecca Nesvet’s English and Humanities Capstone students. In addition, there were four live podcast recordings during the afternoon sessions, details are below.

Four Phoenix Studios network podcast episodes were recorded live from at this event. Recordings are now available for listeners on SoundCloud and iTunes. 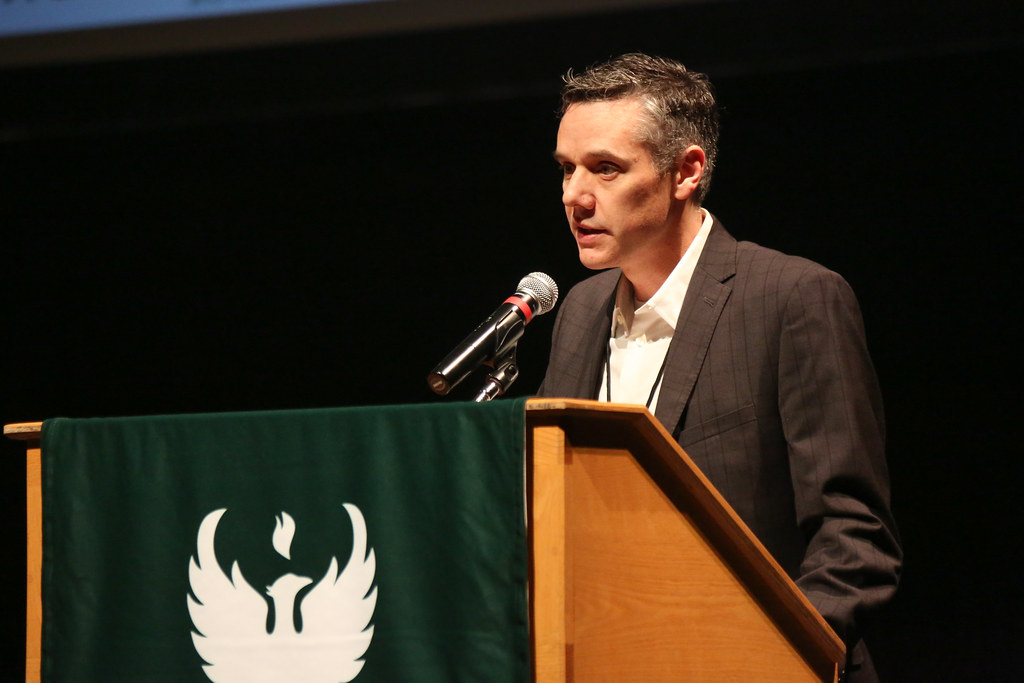 Graduates processed in, waved to family and sat through a fast-paced Commencement on December 14, 2019. One thing evident in this video? Each is thrilled to be a Phoenix and prepared and excited to take on the world!

It’s a tradition of UW-Green Bay graduates to leave a bit of themselves behind as they depart campus. Many toss a pair of old sneakers into the “Shoe Tree.” Symbolic to UW-Green Bay’s 100th Commencement, student speaker Hannah Malmberg tossed her platinum-coated sneakers . 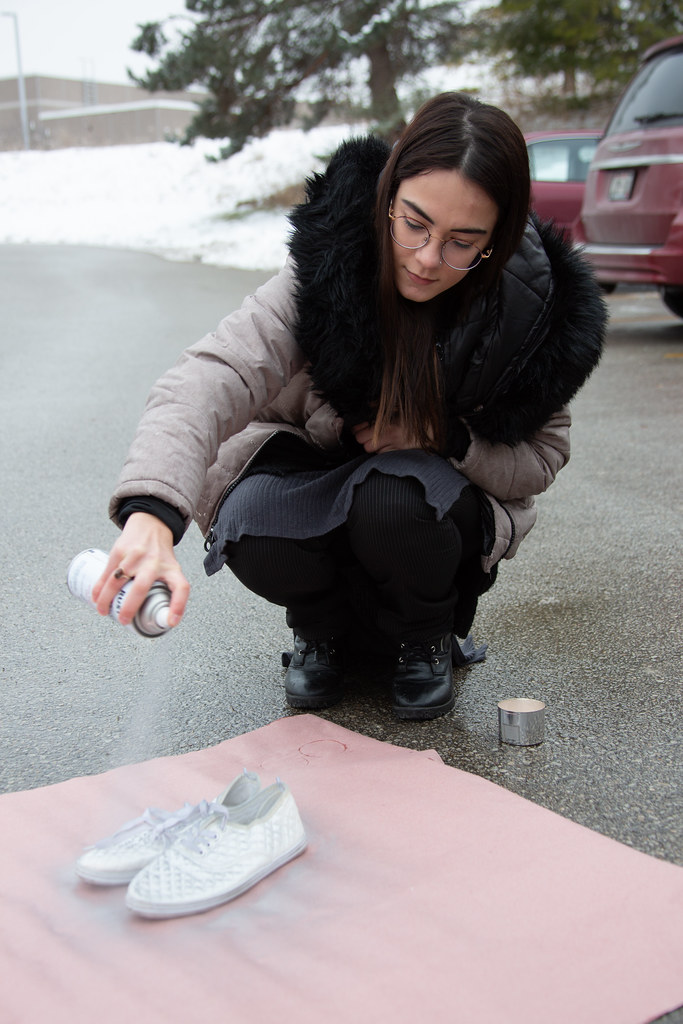 Every college student (and some faculty and staff) need a bit of stress relief near final exams. Members of the Packerland Kennel Club and their outreach dogs paired-up with the Cofrin Library to provide pure happiness. 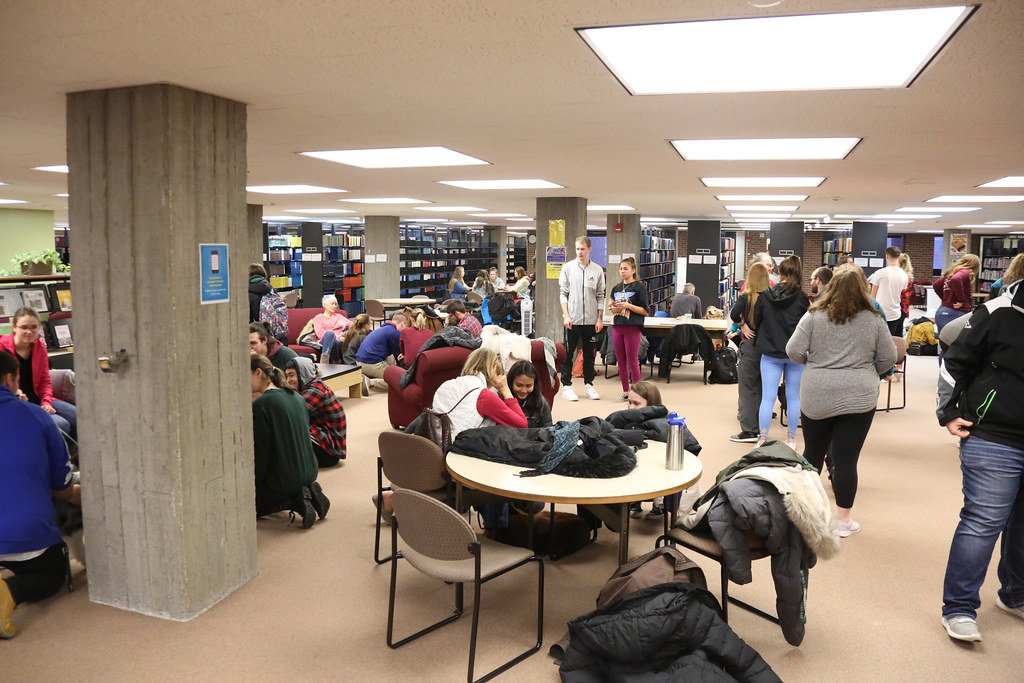 It’s a long-held tradition at UW-Green Bay, expression through grad caps. See how December graduates had the last word. 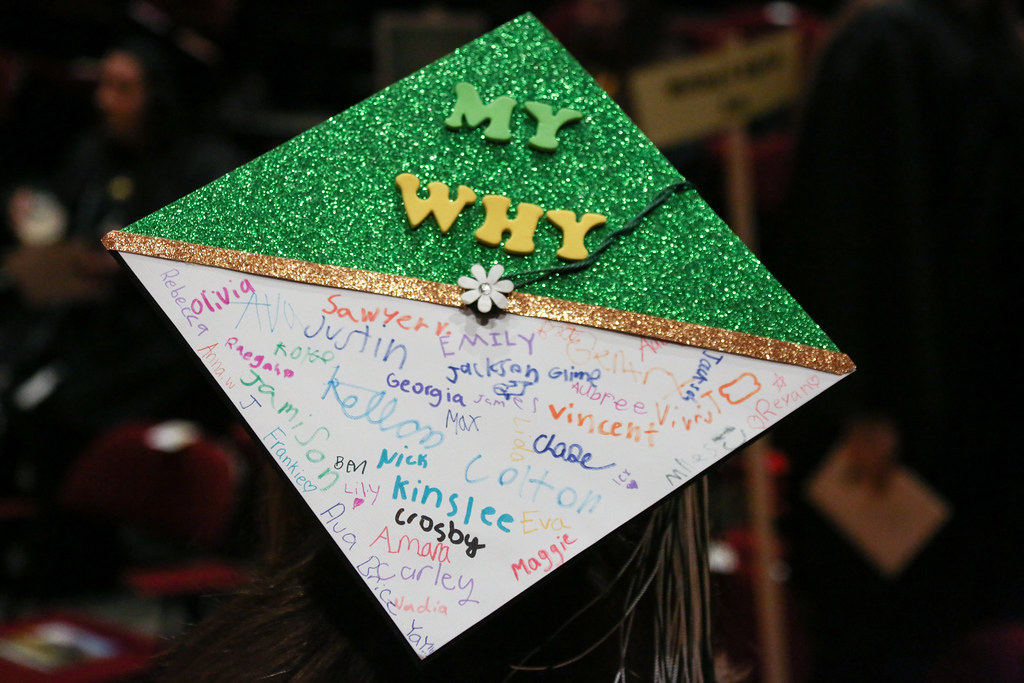 What started humbly in June of 1970 came full circle as the 100th class graduated from the University of Wisconsin-Green Bay on Saturday, December 14. The Fall 2019 Commencement Ceremony, held at the University’s Weidner Center for the Performing Arts, recognized the 432 graduates who earned their undergraduate or graduate degrees.

Interim Chancellor Sheryl Van Gruensven congratulated graduates on both their accomplishments and for being a member of the 100th class. “Every commencement ceremony is special, but you, the Fall Class of 2019, have an added distinction,” Van Gruensven shared. “You represent the 100th class to earn degrees from UW-Green Bay. More than 39,500 students are now a part of the Phoenix family. It has been our honor to prepare you, and all who have come before you, for the workforce and the world.”

Class Speaker Hannah Malmberg graduated on Saturday with a double major in Political Science and Communication. She reflected with her fellow graduates on the resiliency that comes with being a Phoenix. “We may live in an uncertain world, but I know we will land on our feet and excel. We will create the world we want to see for ourselves. We are Phoenix after all,” Malmberg said.

Commencement Speaker and UW-Green Bay Professor Patricia Terry also shared parting thoughts with the graduates, families and friends in attendance, frequently drawing analogies between life and running an ultra marathon, a personal pastime for the engineering professor. “In life, you many not always be the winner, but run the race anyway,” she encouraged those in audience.

UW System Regent Eve Hall was on hand to offer greetings on behalf of the Board of Regents. “I believe that  you, UW-Green Bay’s Class of 2019, have the potential, the passion and the power to change the world.”

UW-Green Bay awarded its first Bachelor of Fine Arts degree to Krynn Hanold. The top five degrees were awarded in Business Administration, Psychology, Human Biology, Nursing and Education, reflecting a strong commitment from the Class of 2019 in meeting regional needs. 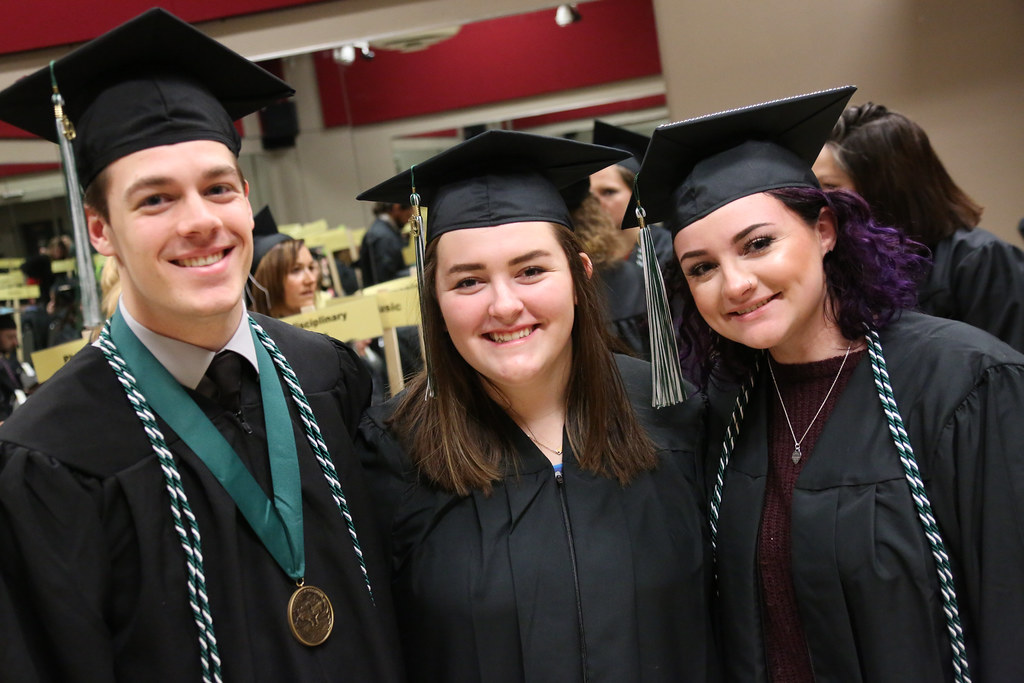 When UW-Green Bay Assistant Prof. Brian Welsch wants to make a point in his Fundamentals of Physics class regarding Isaac Newton’s second law of physics, he makes quite an impact—with a sledgehammer, to be exact.

UW-Green Bay has not had a physics major in more than 20 years, but still offers a physics minor. This particular class generates interest from students in science and engineering, including premed and even future physical therapists.

It’s the type of class where according to Welsch, “you can do a lot of hands-on laboratory-type things.” Which, in this case, entails smashing a cinder block on the chest of Lab Manager Joe Schoenebeck, as he lays sandwiched between a bed of nails and a “chest of death” (also composed of a board of nails).

For those taking notes, the demonstration expresses Newton’s Second Law in terms of change of momentum, impulse and impact. It seems there are examples of the law all around—many with rather painful results. Take the typical falling mountain climber Welsch explains. “The falling climber picks up momentum, but if the change of momentum (as in hitting the rocks) is too short the net result is broken bones.”

The same principle is at work when demonstrating how an airbag absorbs the impact of a collision. But in this demonstration, the “airbag” is more “Flintstonian” in nature; using a cinder block as the airbag, and the sledgehammer representing the speeding object.

And the reason for a bed of nails on bottom, plus a “chest plate of death” (more nails) on top?

“Dramatic effect” explains Welsch. (Actually, the crumbling of block will also dissipate the impact of Schoenebeck’s body against the nails to the point that he won’t become a human pin cushion).

As Schoenebeck settles on to his bed, Welsch continues the lecture, “If I don’t do a good job crushing the airbag, not only will I crush Joe’s sternum, he’ll be impaled by 1,000 nails.”

“2,000” corrects Schoenebeck. (He should know, being the person who nailed them.)

“I just have to not miss,” Welsch assures the classroom. Not breaking the block means the full force of the sledge will be transferred to the “victim.” And if that happens, the concept momentum and impact will still be illustrated, but in a perhaps more painful way.

As for the results of the demonstration? Spoiler alert: the professor nailed it. Plus, as a bonus, a student worker also volunteered to get hammered.