UW-Green Bay’s new “Phoenix Rising” sculpture is providing the campus with unintended attention. Meant to be an iconic artwork that students (and alumni) would take photos of and with, the sculpture is also now being shared widely on multiple social media platforms.

“One thing I heard clearly from students was that while we have a gorgeous campus, we did not have the iconic spot for pictures and gathering that clearly exemplifies our campus and is easily recognizable as UW Green Bay,” Arneson said. “…It quickly became clear that we needed to create a space that was a symbol of our great University that would be universally identifiable and instill even more pride in our University community. Clearly, the symbol for us is the Phoenix. It is a powerful symbol representing us. Upon conversation with many stakeholders, it was decided a sculpture of  the Phoenix would create the energy and space we all desire.”

SUFAC (Segregated University Fee Allocation Committee) and SGA were on board, as was Dean of the College of Arts, Humanities and Social Sciences, Chuck Rybak.

Vanderheyden described how, as a free-form artist, he sometimes forgets to stand back and take a look at the entire piece.

“Occasionally I make anatomical flaws, a hip out of place, head upside down, things the untrained eye may not see… head placement was critical to the outcome, and the day I was going to position the head, no lie, an ornithologist friend, from across the country, Just happened to stop by, and between the two of us, we got the head ‘not’ upside down…

…Fortunately, the Phoenix is a mythical creature, so I had little leeway,” he joked.

Vanderheyden thanked UW-Green Bay Professor Toni Damkoehler (Design Arts) for “extracting a concept from head to to paper.” He described the exterior body and wings as made from high-grade “tank-steel” with a “powerful, stainless steel core, engineered to handle a tornado, and possibly, a car crash,” considering its location near the David A. Cofrin Library circle. “Intellectuals solve problems, geniuses prevent them,” he said, attributing Albert Einstein.

Wagaman said the sculpture has truly become the talk of campus for the first few days of school.

“We initially wanted this as a spot for students to be able to take pictures and symbolize their involvement with the UW-Green Bay University,” Wagaman said. “We want this to become a tradition, similar to the shoe tree on campus, where students come out and take a picture on their first day each year through college, and then end it by throwing their shoes up in the tree. This is OUR statue, and we as students want to make it such. Thank you for attending and helping us reach that goal.” 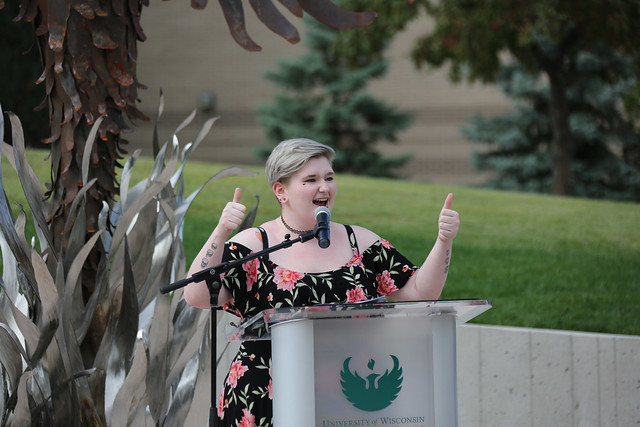 – Photos by Dan Moore, Office of Marketing and University Communication “Tiny Earth” is an initiative that uses a global network of college students (now in 15 countries and almost every state in the U.S.) to identify new life-saving antibiotics produced by bacteria in soil environments. This year, UW-Green Bay students will be studying a soil sample from the Green Bay Packers’ practice field.

A representative from the Packers will join faculty and students for a Tiny Earth kick-off at UW-Green Bay’s Stem Innovation Center at 12:45 p.m. Monday, Sept. 9, 2019. Media is invited.

The second annual Tiny Earth in Titletown Symposium will follow at the Lambeau Field Atrium on Dec. 6, 2019. Medical College of Wisconsin-Green Bay, Nature’s Way, Schreiber Foods, Cherney Labs and other business and organizations, including the Green Bay Packers, are supporting the event. The 2019 research campaign has added students, teachers and administrators from area high schools (West High School, East High School, Ashwaubenon, Bay Port High School, etc.) and the symposium is expected to draw even more than the 250 participants who attended last year.

“A soil sample from the Packers’ practice field is incredibly exciting to our Wisconsin Tiny Earth students,” said UW-Green Bay Biology Prof. Brian Merkel, one of the organizers of the event. “The partnership is a testament to the good that happens when partnerships, including high schools, colleges, business and industry, including the Packers, come together for the common good.”

The UW-Green Bay student researchers will analyze the soil bacteria during the fall semester and present their findings at the Tiny Earth in Titletown Symposium. Green Bay, Wis.—The American International Czech and Slovak The American Czech/Slovak International Voice Competition returns to the University of Wisconsin-Green Bay’s Weidner Center, Friday through Sunday, Oct. 11-13, 2019. Each day’s performances begin at 10 a.m. in Fort Howard Hall, and are free and open to the public. This is the only voice competition featuring Czech and Slovak vocal repertoire in North America.

The competition started as a collaboration with Alain Nonat, Théâtre Lyrichorégra 20, Montreal, Canada, but now takes place only in the United States.

Approximately $15,000 in prize money is awarded at each competition. Every competition invites an international jury of esteemed judges, including singers, teachers, opera directors and conductors from the Slovak Republic, Czech Republic and the United States, who adjudicate each round. Past judges have included Maestro Gildo Di Nunzio of the Metropolitan Opera, in New York City; Mr. Alois Ježek, artistic director and founder of the Dvorak International Voice Competition—the oldest voice competition in the world—in the Czech Republic; Prof. Eva Blahová, mezzo-soprano and voice professor, of Bratislava, Slovakia; and Prof. David Adams, of the Cincinnati Conservatory.

Support for the competition also comes from the University of Wisconsin-Green Bay Chancellor and Provost’s Offices, the College of Arts, Humanities and Social Sciences, the Czech Consulate (Chicago), and various Green Bay community donors.

Free housing in private homes is arranged for those singers who request it, promoting Green Bay community involvement, while helping singers with their expenses.

“I founded the competition in 2003 after having spent 2001-2002 as guest professor at the Academy of Music and Dance in Bratislava, Slovakia,” Meredith said. “I was astounded at finding such beautiful vocal music
by Slovak and Czech composers that were not known to singers in the United States. I realized an international voice competition was the best way to promote the Czech and Slovak vocal repertoire to young singers.”

“It also is a way to keep alive and spread music that was repressed during the communist era and create a spirit of internationalism,” she said.

The competition has received international recognition. Chmel Resch, producer of the voice competition and a former Broadway dancer who is of Czech heritage, was the recipient of the prestigious Trebbia Foundation Award in 2017, for her work with the Czech/Slovak Voice Competition. She was honored at a celebration and dinner at Prague Castle in March of that year, which was televised live on Czech national television.

For more information or to host a competitor, please contact Meredith at meredits@uwgb.edu or call 920-465-2637.